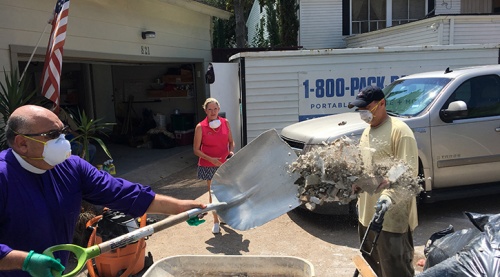 Immediately after the storm with support from Episcopal Relief & Development, the Episcopal Diocese of Southeast Florida provided critical assistance to those hit hardest by Hurricane Irma, including migrant workers, homeless individuals, seniors, youth, children and families who were displaced from devastated communities. The most vulnerable residents received emergency food, water and bedding as well as personal hygiene items. Church partners are deeply embedded in these communities which enables them to both identify and best serve those most in need.The diocese is helping their communities recover with the support of congregations and other local community organizations. In many parts of the Florida Keys, residents live on their boats year-round, making them vulnerable during hurricane season. Hurricane Irma destroyed many of these homes while others were left underwater but still potentially salvageable. In Boot Key Harbor in the city of Marathon, church partners removed a number of these boats from the water and returned them to their owners. As a result, many residents were able to reclaim their homes and begin the recovery process.

In the weeks after the storm, St. Columba Episcopal Church housed almost 100 people in its parish hall and youth house and provided critical food and other supplies. Electricians and builders volunteered to rebuild the congregation’s homeless shelter. St. Andrew’s Episcopal Church in Palmetto Bay served as a food and supply drop off spot for several weeks and, with support from Episcopal Relief & Development, purchased food for meals for the homeless and others in Homestead. At least 10 large trucks picked up supplies from St. Andrew’s and delivered them to the Florida Keys during September and October. St. Nicholas Episcopal Church used its mobile food truck, The Holy Grill, to feed those displaced by the storm. Episcopal Relief & Development continues to work with the diocese to support unmet needs.

St. Matthew Episcopal Church provided healthy food and other support through its local community partners. The East Learning Community Center, which serves 37 public schools in East Orange County, was able to stock their food pantry to feed 5,000 families for several months. In the Washington Shores neighborhood of Orlando, the Central Care Mission Community Garden received assistance to purchase wood, hardware, plants and garden supplies to rebuild the garden which feeds 300 families from their garden and serves as a training resource. Volunteers are rebuilding the garden, which is expected to be ready for planting for the winter growing season.

The Diocese of Central Florida is the epicenter of migration from Puerto Rico when thousands of people left their cities and towns to resettle in neighborhoods around Orlando following Hurricane Maria. Through its membership with VamosPR, the diocese partners with 40 local community organizations to raise its visibility and resources. The diocese centralized its relief efforts by expanding the food pantry at Iglesia Episcopal Jesus de Nazaret (Episcopal Church of Jesus of Nazareth). This church, considered the nucleus of Latino ministries within the diocese, is ensuring that culturally appropriate foods are being provided to affected families and individuals. Temporary housing is being provided by the diocese and long-term needs of the community continue to be assessed.

Go back to 2017 Hurricane Response page