Home | Who We Are | History 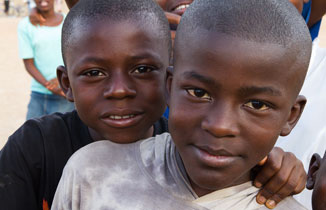 A Tradition of Saving Lives For 80 years, Episcopal Relief & Development has been inspired by the faith and compassion of its supporters and partners to work together for lasting change. Its mission is to seek and serve Christ in all persons and respect the dignity of every human being.

Originally called the Presiding Bishop’s Fund for World Relief (the PB Fund), the organization was established in 1940 by The Episcopal Church. Its initial mission was to assist refugees fleeing Europe during World War II. Soon after the war, the agency’s efforts expanded to include additional humanitarian assistance, focusing mostly on disaster relief.

During the 1960s and 1970s, there was a growing awareness in the US of the challenges facing people worldwide, such as hunger, disease and disasters. With increased funding, the PB Fund took efforts to the next level by increasing its operational capacity and expanding programming to incorporate sustainable development. In the 1980s, major fundraising initiatives supported responses to famine in Ethiopia, an earthquake in Mexico and a volcano eruption in Colombia. In 1988, Episcopal Migration Ministries was formed, founded out of the PB Fund to meet the growing needs of refugee ministries, allowing the Fund to focus on long-term development work.

After Hurricane Mitch in 1998, the PB Fund undertook innovative disaster relief work in Honduras that focused on integrated community development. Over four years, an entire community was constructed, with 200 houses, a school, a clinic and a church. Micro-finance activities and agricultural projects were launched to create economic opportunities and improve food supply. The combination of rebuilding and development through micro-finance and other initiatives helped spur economic growth in the devastated region. This integrated approach became a core element of the agency’s disaster relief work.

From Adversity to Advantage

In recent years, Episcopal Relief & Development has been involved in several major efforts. In 2004 and 2005, large-scale disaster responses to the Indian Ocean Tsunami and Hurricane Katrina expanded the organization’s capacity, partnerships and visibility. NetsforLife®, a program partnership to fight malaria in sub-Saharan Africa, began as a pilot in 2006 and soon was established in a growing number of countries. Since 2010, the US Disaster Program has expanded through the Disaster Preparedness Initiative to support and equip Episcopal Church leaders to prepare for and respond to disasters in their communities.

When a major earthquake hit Haiti in 2010, Episcopal Relief & Development partnered with the Episcopal Diocese of Haiti to offer immediate aid to those affected. In the initial years following the quake, the agency provided emergency relief in the form of food, medicine and assistance in finding shelter for those who lost their homes. Since then, our efforts in Haiti have shifted to long-term recovery programs in the areas of sanitation, shelter provision and employment creation, assisting more than 40,000 people in 2011 alone. Today, Episcopal Relief & Development is collaborating with IMA World Health, IDEJEN and the Bishop Tharp Business & Technology Institute to foster activities in education, business development and micro-credit.

In 2012, Episcopal Relief & Development began incorporating the Asset-Based Community Development approach into all of its work. This model of development affirms the gifts and talents that people already possess, facilitating solutions rather than directing them. This method supports community-driven strategies that are sustainable, empowering people to improve their own lives.

Today, all of Episcopal Relief & Development’s programs follow an integrated model, implemented through a network of partnerships.

The organization has also realigned and expanded its program focus areas to address cross-cutting themes such as gender equality, micro-finance, disaster risk reduction and climate change.

75 Years of Healing a Hurting World

In 2014-15, Episcopalians, friends and partner agencies around the globe celebrated Episcopal Relief & Development’s 75th Anniversary. The 75-week celebration invited supporters to learn more about the organization’s programs and get involved in campaigns to raise $7.5 million to sustain its vital work. Elements of the celebration included a traveling photo exhibition, the 75 Stories Project and five campaign areas to invite dioceses, congregations and groups to learn more and get involved.

At the end of 2016, Episcopal Relief & Development’s Board of Directors approved a new strategic plan that affirms and expands the organization’s programs in three key areas: Early Childhood Development, Combatting Gender-Based Violence and Resilience & Climate Change. The plan will guide the organization’s activities from 2017 through 2021.

For a comprehensive history of the work of Episcopal Relief & Development, view our 75th Anniversary Interactive Timeline.