share
An outbreak of civil unrest began on December 15 in Juba, the capital of South Sudan.  Fighting spread through seven of the country’s ten states, causing 180,000 people to flee their homes.  An estimated 75,000 are seeking refuge in UN bases, and many are looking to the Episcopal Church in South Sudan & Sudan (ECSSS) for assistance.
August 5, 2014

Anglican Alliance issued a renewed call for support for the relief work of the Episcopal Church of South Sudan & Sudan.

Episcopal Relief & Development created a video about the program to date and prospective plans for the coming months.

Episcopal Relief & Development is strengthening the crisis response of the Episcopal Church in South Sudan & Sudan (ECSSS) by providing financial and technical assistance to its humanitarian arm, SUDRA (the Sudanese Development and Relief Agency).  Since February, SUDRA has provided food for 70,000 displaced people in the most critical areas where ECSSS is present.  This includes a daily meal for 3,000 children in Awerial, cooked and served by volunteers from the local Mothers’ Union.

“I am thankful for our partnership with ECSSS, that we can actively support their mission of caring for vulnerable people and creating lasting peace in a region so deeply marked by conflict,” said Abagail Nelson, Episcopal Relief & Development’s Senior Vice President of Programs.  “Their long-term presence and history of strengthening communities has earned them trust across divisions, enabling them to act directly where few others could – both on the ground and at the highest levels.”

“I encourage all Episcopalians to be in solidarity with our partners in South Sudan, through prayer and by enabling Episcopal Relief & Development to continue supporting SUDRA’s vital work,” Nelson said.

Episcopal Relief & Development’s bulletin insert can be used to raise awareness and support for those most impacted by this crisis.

Episcopal Relief & Development supported SUDRA in feeding 3,000 displaced children in Awerial, a program detailed in the case study included in SUDRA’s latest activity report. This is the first stage of Phase 1 activities described in the most recent press release about the combined response to the crisis in South Sudan. Episcopal Relief & Development continues to serve as the lead agency on behalf of the Anglican Alliance and Anglican partners.

“The diocesan teams, along with members from the IDP community, selected the 3,000 participants on the basis of need and vulnerability with priority given to children who arrived in Awerial without any parents or guardians, primarily to children under age 5.  As there were additional rations available, children with a single parent were added from youngest to oldest.”

Please download bulletin inserts and participate in the Day of Prayer for South Sudan on February 16.

Episcopal Relief & Development has also posted to Facebook a photo album of images from SUDRA’s visits to displacement camps.

Episcopal Church Presiding Bishop Katharine Jefferts Schori has called for a Day of Prayer for South Sudan for February 16.

“The world is increasingly concerned over the rampant violence in South Sudan,” the Presiding Bishop said.  “The recent increase in armed conflict, murder, and mayhem has been fomented in part by inaccurate reports of tribal partisanship.  The new nation needs peace, in order that all its people might thrive. The Episcopal Church of Sudan is partnering with others on the ground in that work of peace-building. The Sudanese communities within our own Episcopal Church have been important and effective leaders in this work. I ask your prayers for peace, as well as your awareness and involvement in the lives of our brothers and sisters across the globe. The Prince of Peace serves the whole world.  As his disciples, may we do no less!”

The Sudanese Development and Relief Agency (SUDRA), the humanitarian wing of the Episcopal Church in South Sudan & Sudan (ECSSS), is supplying food, water and medical care to people displaced by the conflict currently enveloping the world’s newest nation. Episcopal Relief & Development is providing technical assistance and financial support to SUDRA, and serving as the key liaison for a group of Anglican Communion organizations supporting the relief and recovery work.

“In cooperation with the Anglican Alliance, we are leading a unified response to the current situation in South Sudan,” said Rob Radtke, President of Episcopal Relief & Development. “We are working in close partnership with SUDRA and ECSSS to develop and refine the response plan, and to engage our Anglican peers in supporting these critical efforts.”

“The need for humanitarian response in South Sudan is great, and the Church and SUDRA have been working with a group of Anglican Communion agencies to determine how they can best use their networks and resources to fill current gaps and look ahead to recovery,” said Nagulan Nesiah, Program Officer for Episcopal Relief & Development.  “The first phase will cover urgent needs for people falling through the cracks in Awerial, Juba and Nimule, and later phases will look at how the Church can coordinate with larger international NGOs toward an integrated response to the current disaster.  However, the Church may play its biggest role during long-term recovery, when people are resettling and rebuilding their lives, because of its long-term presence in communities throughout the country.”

The Episcopal Church Office of Government Relations sent a memo on January 10 to members of the Obama Administration and Congress about the situation in South Sudan.  It highlights the strength and capacity of the Episcopal Church of South Sudan and Sudan as a key partner in peacemaking at both the grassroots and national levels, and encourages the US Government to consider how it can support these efforts.

We urge the Administration and Congress, as they consider the best ways to work with rival South Sudanese leaders to end hostilities and re-engage in political dialogue, to pay particular attention to supporting the efforts of local civil-society leaders – particularly, once again, the faith community of South Sudan – who have longstanding credibility as peacemakers.   Such efforts must be sufficiently resourced, through both private and public investments, to account for the logistical challenges of engaging all parts and sectors and groups in the process.  The Church has credibility and presence but needs the means to effectively implement an extensive peace process.  The U.S. government – which has been a pioneer in engaging faith voices in development efforts around the world – should devote significant attention to discerning how it can resource such efforts.

For more coverage and to read the full text of the memo, read Episcopal News Service’s article here.

Please continue to pray for peace in South Sudan, for Church leaders who are working steadfastly to encourage and support negotiations, and for those who are separated from their homes, loved ones and livelihoods by the conflict.

Episcopal Relief & Development is working with its partners in South Sudan as they respond to the humanitarian needs of people displaced by the current crisis.  The Episcopal Church of South Sudan & Sudan (ECSSS) has established nine relief centers in Awerial to provide supplies and pastoral care to people who have fled violence in the nearby town of Bor.  The Church’s relief and development arm, SUDRA (the Sudanese Development and Relief Agency), reports that nearly 76,000 people from Bor are currently sheltering at churches, schools and under trees in Awerial.  Many of the displaced arrived on boats via the Nile River, which separates Jonglei State from Lakes State.

The number of people reported displaced by the current crisis in South Sudan has risen to 180,000, according to the latest UN OCHA situation report on December 29.  With clashes intensifying around Bor, the capital of Jonglei state, many people are sheltering at the UN base or fleeing to Awerial in neighboring Lakes State.  Episcopal Relief & Development has been in contact with Episcopal Church in South Sudan & Sudan (ECSSS) leadership in impacted areas, including Juba, Bor, Awerial, Bentiu and Malakal. 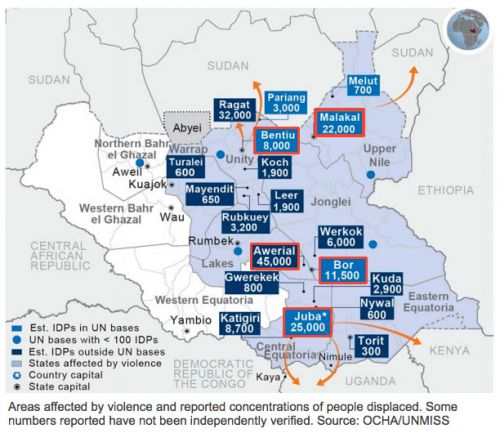 The agency has been working with the Church’s Health Commission and relief and development arm, SUDRA (the Sudanese Relief & Development Agency), to provide necessary assistance for internally displaced people and returning refugees since South Sudan gained its independence in 2011.  The organizations responded to an outbreak of conflict in the border region of Abyei later in 2011, and Episcopal Relief & Development has been supportive of ECSSS’ leadership in peace-building efforts.  The Most Rev. Daniel Deng Bul, ECSSS Archbishop, has been a key figure in mediating conflict and strengthening institutions throughout South Sudan’s emergence as an independent state.

Currently, food, water, shelter, medicine and adequate sanitation are urgently needed in displacement camps throughout the impacted region, which spans seven out of the country’s ten states.  The UN and aid agencies including SUDRA are responding to these needs as the security situation allows.  ECSSS contacts report that many displaced people are seeking assistance and refuge at local churches.

According to The Rev. Joseph Loabe, Director of SUDRA, there are 20,000 individuals from Bor sheltering at the church compound in Awerial.  The church is providing food and seeking to supply additional items such as blankets, cooking utensils and mosquito nets to prevent malaria.  In Malakal, in the northern Upper Nile State, the church is addressing the loss of property and livelihoods after markets were looted and destroyed, and prioritizing medical support and cleanup efforts to reduce waterborne disease.  Food and medical supplies are direly needed in Bor and Bentiu, but security concerns and transportation challenges are hampering humanitarian response in these areas.  In Juba, the country’s capital, SUDRA is working with the Ministry of Health to provide local hospitals with necessary medical equipment to treat injuries and illnesses.

Please continue to pray for all humanitarian workers, especially ECSSS and SUDRA staff, who are responding to acute needs in this difficult situation, and for all those impacted by violence, displacement and uncertainty.  The Rt. Rev. Anthony Poggo, Bishop of the Diocese of Kajo-Keji, issued the following appeal for prayers:

The Episcopal Church of South Sudan & Sudan (ECSSS) reports overwhelming attendance at prayer services during Christmas week, as South Sudan struggles with an outbreak of violence and civil unrest.  Please continue to pray for our Church partners there, who are responding to the health needs of people displaced by the conflict, and for all who are impacted.  According to the UN, over 120,000 people have fled their homes, seeking safety. The Church’s Health Commission and its relief and development arm, SUDRA (the Sudanese Relief and Development Agency), are working together to develop a consolidated proposal in response to the humanitarian needs across the country, including working with the Ministry of Health to send medical supplies and equipment where they are urgently needed.
To make a donation in support of our programs, please click here.
Sign up for News