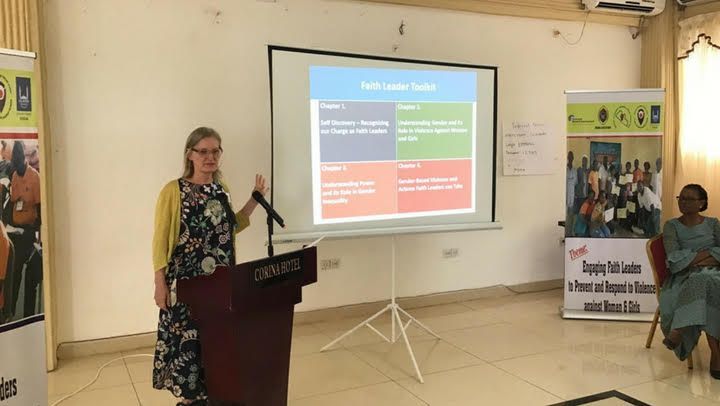 New York, NY– Episcopal Relief & Development and the humanitarian arm of the Episcopal Church of Liberia (ECL-RD) celebrated the three-year achievements of their program that engages faith leaders to prevent and respond to violence against women and girls in Liberia at a forum in Monrovia on Thursday, June 21.

More than 78 attendees participated in the forum, including The Hon. Alice Johnson-Howard, Deputy Minister of Gender, the Liberia Ministry of Gender, Children and Social Protection and The Most Rev. Jonathan Bau-Bau Bonaparte Hart, Archbishop, Internal Province of West Africa/Bishop, the Episcopal Church of Liberia. There were representatives from the Pentecostal, Catholic, Methodist, Lutheran, Baptist and Full Gospel churches, as well as the Chairperson of the National Muslim Council. The Liberia Ministry of Education and the Ministry of Justice were represented in addition to national and international non-governmental organizations such as UNICEF, USAID, UNDP, UNFPA, ActionAid and the International Rescue Committee.

During the event, participants discussed key findings, learnings and practices from an external evaluation of the three-year Violence Against Women and Girls (VAW/G) Prevention and Response program. The evaluation was conducted from October to November 2017. Download the evaluation summary.

“The Church is committed to ensuring dignity for women and girls,” said The Most Rev. Jonathan Bau-Bau Bonaparte Hart, Archbishop, Internal Province of West Africa/Bishop, Episcopal Church of Liberia. “The greatest asset the faith community can give is to make people know their rights and the resources available to them and that is what this project is all about.”

At the forum, the results of the three-year program evaluation were presented, including promising practices in four areas utilizing:

The evaluation documented a reduction in violence against women and girls and an increased awareness of support and services for survivors. The report also noted a positive shift in perceptions and attitudes toward the role of women and girls in communities. The comprehensive training methodology and toolkit are unlike similar faith-based programs as they are centered on engaging both Christian and Muslim leaders in the same room, at the same time and with the same tools. The forum also highlighted participant experiences and insights.

Violence against women is pervasive throughout Liberia, and its increased prevalence can be attributed to the country’s devastating 14-year civil war. The program was designed to prevent gender-based violence (GBV) by addressing negative beliefs, attitudes and behaviors related to women and girls’ roles and rights. Ninety-eight percent of Liberia’s population identify with a faith tradition. Therefore, faith leaders can play influential roles, both in preventing violence and in facilitating more effective responses to incidents. From 2015-2017, in consultation with the Technical Working Group (TWG) of the Inter-Religious Council of Liberia, the program developed and tested the Faith Leader GBV Toolkit, an experience-based tool to train faith leaders in preventing and responding to gender-based violence through their work.

“As people of faith, we are called to reconcile our relationships with each other with respect and love. It is our responsibility. I am grateful for the contributions of our Christian and Muslim brothers and sisters as we support women and girls to live with dignity, free from violence.” Sheikh Alhassan Kamara, Co-Chairman of Technical Working Group of the Interreligious Council of Liberia.

“Our program focusing on the prevention of violence against women in Liberia shows the value of equipping a coalition of clergy and advocates with information and prevention strategies to change detrimental attitudes and social norms,” said Rob Radtke, President & CEO of Episcopal Relief & Development. “Helping communities promote the rights of women is an important focus of our work. I am grateful for our local faith networks for working with us as we move toward a vision where everyone is treated with dignity and respect.”