Responding to Famine in South Sudan 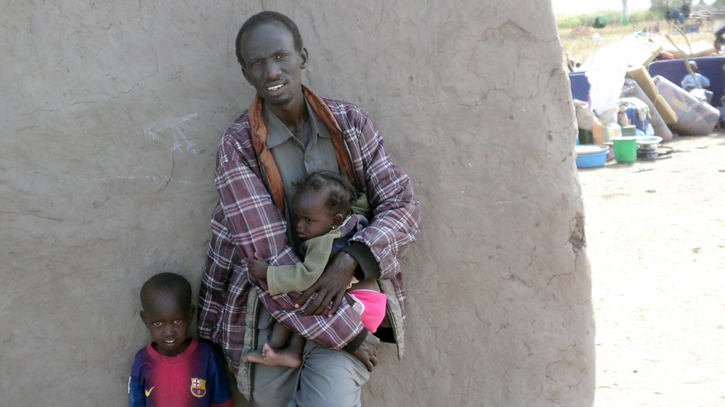 Episcopal Relief & Development participated in an Anglican Alliance call on February 21 with the leadership of SUDRA, the humanitarian arm of the Episcopal Church of South Sudan and Sudan, regarding the previous day’s UN famine declaration. Episcopal Relief & Development plays a leadership role in the Anglican Alliance’s ongoing relationship with SUDRA, and has helped coordinate the Alliance’s crisis response efforts there since 2014.

Episcopal Relief & Development is working with the Episcopal Church of South Sudan and Sudan and the South Sudanese Development & Relief Agency (SUDRA) to respond to needs after devastating famine and food shortages in the country.

Through a longstanding relationship with the Anglican Alliance and church partners in South Sudan, Episcopal Relief & Development is providing critical food to 20,000 people in Rubkona County in Unity State. This partnership supports internally displaced people fleeing violence due to political unrest in South Sudan. Changing weather conditions are intensifying food shortages, making it difficult for farmers to grow crops. Local diocesan disaster teams are distributing food and other supplies such as sorghum, beans, oil and salt to roughly 6,000 women, 10,000 children, 3,000 elderly and 1,000 people with disabilities.

Hunger and malnutrition are widespread and further complicate access to education and exacerbates gender justice issues. According to SUDRA, women and girls traveling long distances in search of food for their families are most vulnerable to attack or sexual violence.

Children, particularly young boys, are left with few options. Since 2013, approximately 16,000 child soldiers have been recruited to join rebels and government forces. As a result, 51 percent of children are not attending school.

Please pray for families and communities impacted by famine and political unrest in South Sudan.

“In the midst of looming famine conditions, IMA and our partners work to ensure that young children and new mothers who have been forced from their homes – by ongoing violence, extreme weather and insecurity – have access to nutrition.

“Thanks to donations from individuals and organizations, including All We Can, Episcopal Relief & Development and Lutheran World Relief, IMA has been able to work toward improving these services and overcoming the challenges to providing care in the world’s newest nation.”

The expansion of existing services will assist approximately 40,000 affected people, including 3,600 pregnant or nursing women and 7,200 children under the age of five. The number of displaced people being served by IMA in its Duk County program area has nearly doubled over the past six months. As a result, Episcopal Relief & Development will partner with IMA to establish a Stabilization Center to treat children age five and younger suffering from life-threatening malnutrition.

Episcopal Relief & Development’s support will enable the construction of a new facility to accommodate sick and malnourished children, including 24-hour care for patients until they attain a healthy weight and recover from illness. The Stabilization Center will include a perimeter fence for security, latrines and a handwashing station for sanitation, a shaded waiting area for incoming patients, and an inpatient ward for treating serious illness. Additional support will provide nutrition supplies and famine relief services to those directly at risk from the food shortage.

“Our partnership with IMA has been integral in maintaining relief efforts in South Sudan. Their longstanding relationships with organizations and ministries in the region allow immediate response and assistance to those affected, and enable us to effectively direct our aid in South Sudan,” said Nagulan Nesiah, Episcopal Relief & Development’s Senior Program Officer for Disaster Response and Risk Reduction.

Violent political conflict and an ongoing famine situation have created a humanitarian crisis in the Jonglei State of South Sudan. For more than three years, fighting between the Sudan People’s Liberation Army, loyal to President Salva Kiir, and the Liberation Army in Opposition has disrupted everyday life for nearly 5 million people. Conflict and changing weather patterns have put the agricultural system in South Sudan at risk, hindering people’s ability to raise livestock and harvest crops and resulting in a worsening hunger crisis. Existing crops and property face destruction as a result of the ongoing political violence, and displacement and instability prevent people from recovering their farms and rebuilding their lives. With over 100,000 men, women and children at immediate risk for starvation, the barriers to stabilizing local food supply have driven people to seek refuge and aid in neighboring counties.

Please continue to pray for those affected by the conflict and famine in South Sudan, and for those working to reduce hunger and alleviate human suffering.

Episcopal News Service posted an article on the humanitarian response to the famine declaration in South Sudan.

“Episcopal Relief & Development has been active for more than two years supporting local efforts to provide food aid in South Sudan, through its partners in the Anglican Alliance and by working with relief agencies and diocesan leaders in the country. The organization has a continuing presence in areas that, while not meeting the definition of famine until now, have long been dealing with extreme food shortages, said Nagulan Nesiah, senior program officer for disaster response and risk reduction.”

Episcopal Relief & Development participated in an Anglican Alliance call on February 21 with the leadership of SUDRA, the humanitarian arm of the Episcopal Church of South Sudan and Sudan, regarding the previous day’s UN famine declaration. Episcopal Relief & Development plays a leadership role in the Anglican Alliance’s ongoing relationship with SUDRA, and has helped coordinate the Alliance’s crisis response efforts there since 2014.

“Over half the people in South Sudan are on the verge of famine – due to drought and the security situation,” explained The Rev. Joseph El Haj, Manager of SUDRA, on the call. “In Yei and Kajo Keji many people have left their homes and harvests. They are now without food. In Kajo Kaji the markets don’t have food. Many have already moved to Uganda.  Others are staying around the churches for safety.”

Episcopal Relief & Development has responded to emergency needs during several periods of political crisis over the past few years, most recently in July 2016 when approximately 220 families sought refuge on Cathedral grounds during an outbreak of violence in Juba. The organization’s relationship with SUDRA began before South Sudan gained its independence through a referendum vote in 2011, and has since included emergency response activities as well as efforts to resettle refugees.

“Food insecurity, hunger, malnutrition has been getting steadily worse since the conflict started three years ago,” said George Fominyen, UN World Food Program spokesperson in Juba, according to CNN. The UN also noted that 1.5 million people had fled from South Sudan to Uganda, and nearly 2 million are internally displaced within the country.  An estimated 4.9 million people are in need of urgent food, nutrition and agriculture assistance.

Please continue to pray for all those affected by unrest and food shortages in South Sudan, and for those who are working to reduce suffering and restore security.

“We are concerned about the long-term impact of political instability on South Sudan’s agricultural and economic sectors, since it is very difficult to recover when normal day-to-day activities have been put on extended hold due to displacement,” said Nagulan Nesiah, Episcopal Relief & Development’s Senior Program Officer for Disaster Response and Risk Reduction. “Whenever we talk with our partners in South Sudan, they always ask us to pray for peace. Emergency assistance will help in the immediate term, but lasting peace is necessary for a full recovery.”