A New Start for Women of the Democratic Republic of Congo 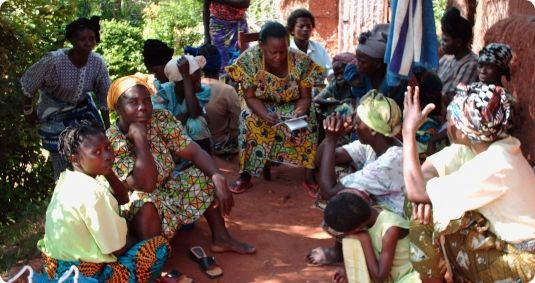 Elize, a widow and mother of five, lives in the Democratic Republic of Congo (DRC). Struggling to support her family while simultaneously dealing with the loss of her husband and the psychological aftermath of rape, her story is not an unusual one for the region.

The DRC has been plagued by violent conflict and civil strife for over a decade. The situation is haltingly complex – with no one factor that can account for the violence. The struggle over a wealth of natural resources, tensions between ethnic groups and the influence of rebel militia groups from neighboring Rwanda all play a part in this conflict. The situation in the DRC has been described by many as the worst humanitarian crisis in recent history.

Despite the signing of peace accords in 2003, fighting continues in the Eastern region of the DRC and people continue to die at rates comparable to those during the war. According to the New York Times, approximately 45,000 more lives are lost each month.

“However, the violence cannot simply be measured by the number of lives lost,” said Danielle Tirello, Episcopal Relief & Development Program Associate for Africa. “In this region, more than 20,000 women have been affected by the gender-specific violence of sexual assault and are living with the aftereffects of that experience.”

Partnership is critical to Episcopal Relief & Development’s work in settings where the level of need and degree of suffering is as encompassing as in the DRC. In the war-torn Eastern region, Episcopal Relief & Development has worked with the Diocese of Boga to help those in need. One component of the partnership is the creation of the Union des Femmes pour la Paix et la Promotion Sociale (UFPPS), a special ministry designed to reach local women like Elize.

The UFPPS began with a reconciliation program, which not only provided women with the tools they needed to deal with the aftermath of sexual assault, but also created an opportunity for them to confront a mutual hatred of those in rival ethnic groups.

“These women have experienced so much pain that to face another person who they associate with the cause of that pain can be traumatizing,” said Tirello. “Providing them with a safe environment where they can confront these feelings is the first step down a long road to peace in the region.”

Many participants, including Elize, have expressed their disbelief that they could learn to peacefully co-exist with women of different ethnicities and their thanks that the UFPPS has made it a possibilty.

With help from Episcopal Relief & Development, the UFPPS has followed up its reconciliation efforts with programs to empower its members. In addition to providing HIV testing and basic medical care, the UFPPS has created economic opportunities for members through micro-finance.

Previously only able to afford 12 kilograms of beans to sell each month at the market, Elize has utilized the micro-finance opportunities to expand her horizons. After receiving two loans from UFPPS, Elize has been able to double her business, selling 24 kilograms of beans each month. She reports that in addition to supplying adequate food and clothing for her family, she is proudthat she can now send her children to school.

Elize remains an active participant of UFPPS and expresses her gratitude to the program by donating some of her income each month. Her commitment will help the UFPPS and Episcopal Relief & Development support women like her in the future.

“It is truly amazing to see these women, whose lives have been devastated by violence, begin to recover with just a little help,” said Tirello. “Elize is living proof that small initiatives can begin a cycle of healing and change that benefits individuals, families and entire communities.”

For more information about Episcopal Relief & Development’s programs in the Democratic Republic of Congo, click here.  Follow this link to support the organization’s work around the world.