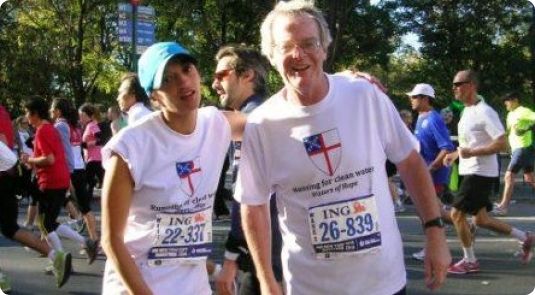 “With the notes from the young people given to me at Convention in my pack, I set off to the sound of Sinatra’s ‘New York, New York’ blasting from the hyped up speakers. By now I had pushed the issue of ‘what am I doing?’ to the back of my mind and set off. There was no turning back. …”

With those thoughts, the Rt. Rev. Alan Scarfe, Bishop of the Episcopal Diocese of Iowa, began his latest run for a good cause: the 2010 New York City Marathon. When he finished 26.2 miles later, he had not only gotten an up-close tour of all five city boroughs, he had also raised life-saving funds to help provide clean water to communities on two continents.

Earlier this year, Bishop Scarfe announced he would run the marathon as his 2010 Bishop’s Appeal to the Diocese of Iowa, and to celebrate his 60th birthday. He asked members of the diocese to support the run with financial pledges. “It is not easy to get into this marathon,” he wrote in his appeal, “but the organizers are sympathetic to those running for special causes.”

Bishop Scarfe has had a lifelong passion for running, which provides him with both a space for spiritual reflection and a means of ministering to others. As a teenager in his native England, he organized a fundraising run to help send underprivileged youths to camp. After later marrying his wife, Donna, he ran 60 miles from London to Canterbury in support of a community theater project with which she was involved. Bishop Scarfe graduated from the General Theological Seminary in New York City and was ordained in the Episcopal Church in 1986. In 2002, while serving as a rector in Los Angeles, he was elected Bishop of Iowa. Soon after beginning his episcopacy, Bishop Scarfe ran from Davenport to Des Moines—close to 200 miles over nine days—to raise funds for assisting recent seminary graduates accepting their first calls to parishes.

And on November 7, accompanied by his daughter, Kim, he found himself running on behalf of others once again. Wearing t-shirts proclaiming “Bishop of Iowa” and “Daughter of the Bishop of Iowa,” the pair made their way through the city mile by mile, carried by the cheers of the crowds and the tens of thousands of other runners around them. Donna met them at the 18th mile and again at the 23-mile mark, giving them a fresh burst of energy in the midst of exhaustion and muscle cramps.

Finally, they entered Central Park, the very last stretch, and Bishop Scarfe crossed the finish line in just over four hours and 40 minutes—beating his personal time goal by 10 minutes. “One remarkable effect of a marathon is the respect you pay even to a sidewalk curb as you trudge home,” he wrote afterward in a diocesan newsletter article.

The sore muscles were much easier to bear knowing that lives would be saved through his efforts. “Now of course, I am waiting your turn—to help ease the pain with your giving,” he wrote to the diocese. “Thank you to everyone who has given for the cause, and to those of you still collecting pledges or waiting to see if I really did it!”

The pledges raised will support water projects in Swaziland and Sudan through Waters of Hope and recovery programs in Pakistan that help address clean water concerns through Episcopal Relief & Development. “As Iowans who have been affected directly by floods in 2008, we are particularly attuned to the plight of those in Pakistan suffering the consequences of this year’s massive flooding,” Bishop Scarfe said. “Together, we hope to bring help and encouragement to people in need.”

“We are deeply grateful for Bishop Scarfe’s support and his witness to this work,” said Abagail Nelson, Senior Vice President for Programs at Episcopal Relief & Development. “Thanks to his compassion and passion, life will be better for many who are now suffering.”