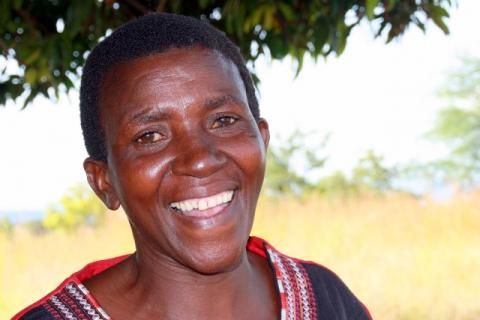 “Look!” said Susana* as she danced for us, feet and hips moving vigorously under the multicolored wrap around her waist, a huge smile illuminating her face. My colleague Maria and I stood mesmerized, returning a smile of delight at what we were seeing.

When we first met Susana three months previously, she’d been carried into one of the rural centers of the Salt, Light, Health (Sal, Luz, Saude) program near Cobue, Northern Mozambique. The program is overseen by the Anglican Diocese of Niassa, a partner of Episcopal Relief & Development. At that time, Susana was thin, weak and paralyzed from the waist down. She had arrived from a mining community up in the mountains — a three-day journey that included two days on a sailing dhow.

Upon arrival, Susana was examined and then counselled before agreeing to be tested for HIV. Within five minutes of applying a drop of blood on a test strip, the two lines that emerged informed us that Susana, like about 7% of the other adults in her area of Lago District, is HIV-positive.

Based on experience we gained from the treatment of a 10-year-old lad who had also had lower limb paralysis a few months earlier, we started Susana on tuberculosis (TB) treatment before commencing antiretroviral drugs (ARVs) to fight the HIV. We hoped (but were unable to confirm in the absence of x-ray facilities and other tests) that the paralysis was the result of spinal TB and, despite its advanced stage, would respond to medication.

During the month that followed, Susana gradually regained the capacity to move her feet, then to raise her legs and at last to stand. We watched her optimistic determination with admiration as she learned to walk again, clinging to the walls as she maneuvered slowly around the modest building that serves as an in-patient facility.

Susana has now completed a six-month course of TB treatment. She continues on ARVs at home, with the encouragement and support of community volunteers and visits from the professional health team. She is now living positively — no longer sick, but as a healthy, active and productive person — and continuing to make others laugh with her cheerful sense of humor.

At times, poverty and HIV can seem like overwhelming and irresolvable problems, particularly in remote and inaccessible areas like those in Northern Mozambique. Yet a tremendous amount can be achieved when the Church works together with communities, health personnel and the government (who in this case makes available essential medicines).

Working together, recognizing each of our contributions and potential — our salt and light — we are multiplying our few resources and improving public health.

Through the Salt, Light, Health program, over 20,000 people now have better access to both curative health care and preventive education to reduce their susceptibility to malaria, HIV/AIDS, parasites and other diseases. Since 2008, Episcopal Relief & Development has helped the diocese expand its work in training over 300 volunteers and midwives who are now serving 44 remote communities. These efforts are providing access to better health and changing lives for Susana and many others throughout the hills and lake shore of Northern Mozambique.

———-
Dr. Peg Cumberland is the Salt, Light, Health technical advisor, working with a team of 12 who are assisting people in their communities in preventing illness and promoting health.

Photo: The Salt, Light, Health program has enabled Susana to regain her health, vitality and life.