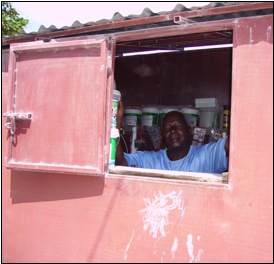 On the anniversary of the January 12, 2010 earthquake, as we pray we are reminded of people’s painful losses as well as their long journey toward recovery.

Monsieur Vernet sells hardware from a kiosk he made out of shipping container parts. “I used to sell from a ‘real’ shop,” he sighed.  Pointing across the dirt street to one of the many walled-off and vacant Carrefour lots where collapsed buildings used to be, he continued, “Right over there is where I rented a shop, before the earthquake, that is.”

Vernet has been selling hardware for “years”. Before the earthquake he had not only home improvement supplies, but also electrical supplies, car tools and car parts. He built up his inventory over time with the help of micro-credit services from CEDDISEC, the relief and development arm of the Episcopal Diocese of Haiti.  Prior to the earthquake he was “in good standing,” – said with a smile and pride – having taken out and fully repaid several loans that permitted him to build his business by increasing and diversifying his stock.

When the earthquake hit, Vernet’s wife was at their home in Gressier. Gressier borders Carrefour, the town closest to the epicenter of the quake, so when the shock hit, their house collapsed. Vernet’s wife had been hit by a falling block as she escaped, and had suffered a serious head injury. Vernet, amidst the chaos in Haiti, put her in a car and took her to a hospital in the neighboring Dominican Republic (DR), about 40 miles away. 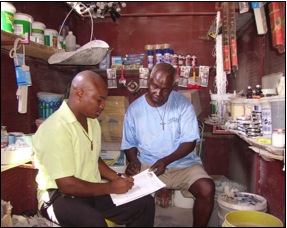 While in the DR, Vernet received several calls from his family and friends informing him that his hardware store in Carrefour had also collapsed, and that his merchandise was being looted. “My wife was more important to me than that store,” he shared, “I just hung up… what else could I do?”  Shortly thereafter, Vernet’s wife of 40+ years passed away.

Last year Vernet restarted his business. He pieced together his kiosk and bought his initial stock with small funds he borrowed from close friends. He has chosen to restart in Carrefour, right across from his old shop, because this is where “his” customers are.

As a former client of the Church’s pre-earthquake micro-credit program, Episcopal Relief & Development has prioritized Vernet’s application for the new 2014 loan program. His plan is to once again build and diversify his inventory. Vernet is one of 43 potential clients in line to receive loans in 2014.

When asked why he has not applied for a loan from one of the many loan agencies in Haiti today, he replied, “Because the people of the church were there for me in the past, and I know they will be there for me now and in the future.”

He then added with another smile, “And because they have the best [lowest] interest rate in town!”

Tammi Mott is a Program Officer with Episcopal Relief & Development.