Brian Sellers-Petersen grew up in the small college town of Mankato, Minnesota. His parents were the first generation off the farm, and “my most vivid memories as a young child were of both sets of grandparents, aunts, and uncles who were all farmers.” With a background so rooted in farming and its people, it’s almost inevitable that he connected with food growers around the world during his 25 year-long career working with international humanitarian agencies such as Episcopal Relief & Development. As he says, “most dirt paths that I’ve been able to walk on lead into agriculture, subsistence farming, and food.”

“Christians and Episcopalians are people of ‘the table,’ each week we celebrate our faith through sharing a meal of bread and wine,” Brian continues. “It’s natural for churches to be drawn to agricultural ministry. Every congregation has someone with a green thumb. Even the most urban congregation has someone who grew up on a farm or gardening.” Brian’s new book, Harvesting Abundance, arises out of his belief that each of those ‘green thumbs’ has a story the world needs to hear.

In Harvesting Abundance, Brian celebrates a few Episcopal Relief & Development programs and illustrates why he has such deep appreciation for the expertise of our partners and other food growers. For example, roughly 15 years ago while on one of his first trips to El Salvador for the organization, he met a local farmer Don Cornelius. Realizing Don Cornelius was doing things in his village that could be applied in both rural and urban communities around the world, Brian understood that in Don Cornelius he’d found a mentor. “He had a chicken coop, I got a chicken coop. He grew tomatoes, I grew tomatoes… We have so much to learn from each other. Every time I visit these projects, I learn something that I can apply back here in the United States.” 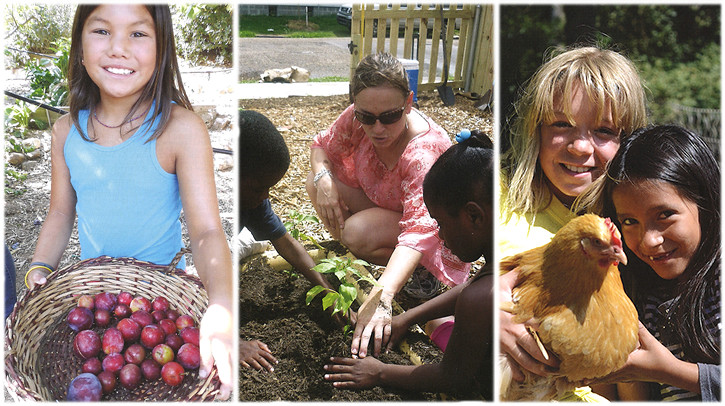 Brian naturally turned to gardening and growing when Rob Radtke, President of Episcopal Relief & Development, challenged him to help create a curriculum teaching young people about the abundance provided through service. The Abundant Life Gardening Project is an interactive Scripture-based, elementary school-aged children’s program available to  churches, teachers, families and others. Seven lesson plans – Water, Seeds, Soil, Animals, Harvest, Tools and Family Garden – and two suggested liturgies (Blessing of the Animals and Blessing a Garden) share the organization’s message of and hands-on approach to ‘healing a hurting world’.

The curriculum presents the mission of sharing and exchange underlying our agriculture initiatives with interactive activities that can adapt or expand according to the situation. Participants are encouraged to take collaborative action and value each person’s contribution to the whole, which is precisely why Brian took The Abundant Life Gardening Project as an opportunity to tour projects, get into conversations with and gather the stories of food growers all over the world. “These people with the green thumbs, pun intended, they keep their light under a bushel.”

As we approach Thanksgiving, Harvesting Abundance seems an appropriate gift and thank you to the many people initiating and sustaining community-based gardens and food-growing. After years of eagerly seeking out every opportunity to explore every garden and gardener he could find (“I sometimes sneak into church gardens and get the real scoop from the gardeners”) what Brian has described in his book are only a fraction of the stories he wants to share about this very personal, highly local face of the Episcopal community.

Brian’s goal is to extend community across oceans and continents, using his travels and connections to learn about and share food growing methods and possibilities. The book is part of what he sees as a development continuum that, along with the Abundant Life Gardening Project, includes the Episcopal Church’s advocacy around the U.S. Farm Bill, churches identifying land assets potentially useful for food production or garden spaces, or distributing their garden produce at Collection.

Harvesting Abundance captures a portion of the growing movement around food production and sustainable local food within the Episcopal Church. Responding to this movement, The Abundant Life Garden Curriculum is currently under revision to make it multigenerational. As Brian notes: “…there are very few gardens out there that are sustained by one person. It takes a village, it takes a church… Neighbors start to feel ownership. They may never darken the door of the church, but it becomes their church. It’s the coming together.”

After 17 years with Episcopal Relief & Development, Brian Sellers-Petersen is heeding the call of agricultural evangelism, leaving us with an abundance of wisdom, friendship and love.

Most recently, he served as senior advisor to Rob Radtke, the president of the organization. Brian has held different positions with Episcopal Relief & Development, including western regional director and director of church engagement where he led pilgrimages to development programs including agricultural projects in Ghana, Nicaragua, El Salvador, Guatemala and Honduras. He also created the organization’s Abundant Life Garden Project curriculum. As the co-founder of Cultivate: Episcopal Food Movement, Brian is an avid gardener and apiarist who tends to vegetables and bees at home and at his office located at St. Mark’s Cathedral in Seattle.