World Food Day is October 16, 2014. The goal throughout the year is to raise awareness of the challenges facing family farming – which is the largest employer in the world. In this blog, Sara Delaney shares the challenges she witnessed in India.

This past July I walked with farmers along their rocky fields in Yavatmal, India. Here they own small plots of land that are usually less than one acre and they rely solely on rainfall as a water source. This rainfall comes in the form of the annual monsoon, which sweeps across India in the summer months. This year though, the monsoon was late – over a month late. Instead of arriving in June, it did not start until the day we arrived in late July. 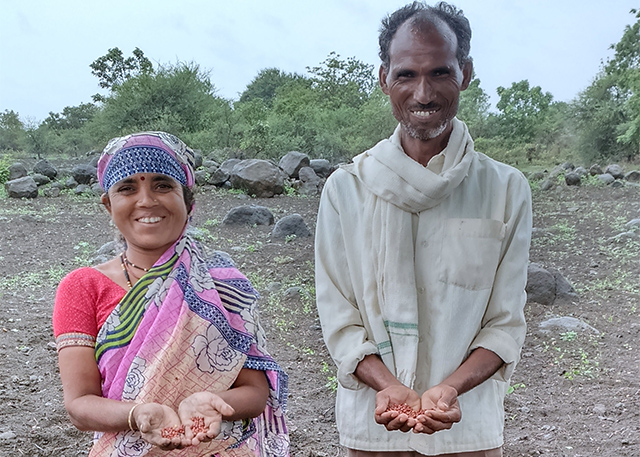 Over the last decade, the farmers in Yavatmal have all slowly switched to growing cotton as their main cash crop, and have been growing fewer and fewer traditional food crops such as wheat and lentils. When the price of cotton is high, it is possible to earn more than is possible by selling food crops. While a few have prospered with the cotton, many smaller farmers have had trouble – in particular when a bad year makes it difficult to recoup the large loans they have taken out to cover the more expensive seeds, fertilizers and pesticides needed for the cotton.

While the farmers we talked to were very happy to finally see the rain, the story they told really broke my heart. Each had already sowed their entire fields once; many had already sowed twice, in anticipation of the coming rains. But when the rain didn’t come, the seeds dried up and died. 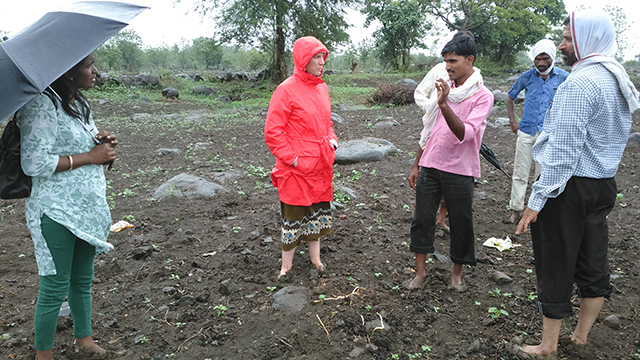 Now that the rain had started again, they were going to wait a few days to make sure it stayed, and then try again, for a third time. It was not just the added labor, and the disappointment that comes from seeing something you planted dry up, that got me. More so, it was the knowledge that these farmers had spent part of their very limited resources on something that, literally, did not bear fruit. And many had done so more than once.

Our new agriculture program with CASA (the Church’s Auxillary for Social Action), began in 2013, after they suggested there was a need to work closely with farmers in this area. Unfortunately, we can’t solve the problem of increasingly unpredictable rainfall in India, even though I wished I had an answer for this when I talked to these farmers.  We can, though, at least support them to diversify their production, so that they are growing more indigenous food crops that may better withstand drought, and are not as expensive to grow. We can help them build structures on their land to reduce erosion and keep valuable soil in place, and teach them new ways to make compost, so that the soil can hold more rainwater when it comes. And, we can help link the farmers to the best crop insurance that is available, which may cover some events like this in the future.

I walked away from my first visit feeling frustrated that there wasn’t more we could do. The rain continued to pour down for the next two days, but on the third day it stopped, and had still not resumed when I got on a small plane bound for Delhi.  As weather and rain patterns continue to deviate from normal and disrupt ways of life, it is small farmers like those in Yavatmal, India who stick in my mind.

This video from the Food and Agriculture Organization of the United Nations provides some context about the importance of family farms, particularly in rural areas.

Images: Top, a husband and wife team shows us the lentil seeds they are growing with the new program.Bottom, a farmer explains his planting techniques to the group.