Home | Stories | You Are a Celebrity to Me!

You Are a Celebrity to Me! 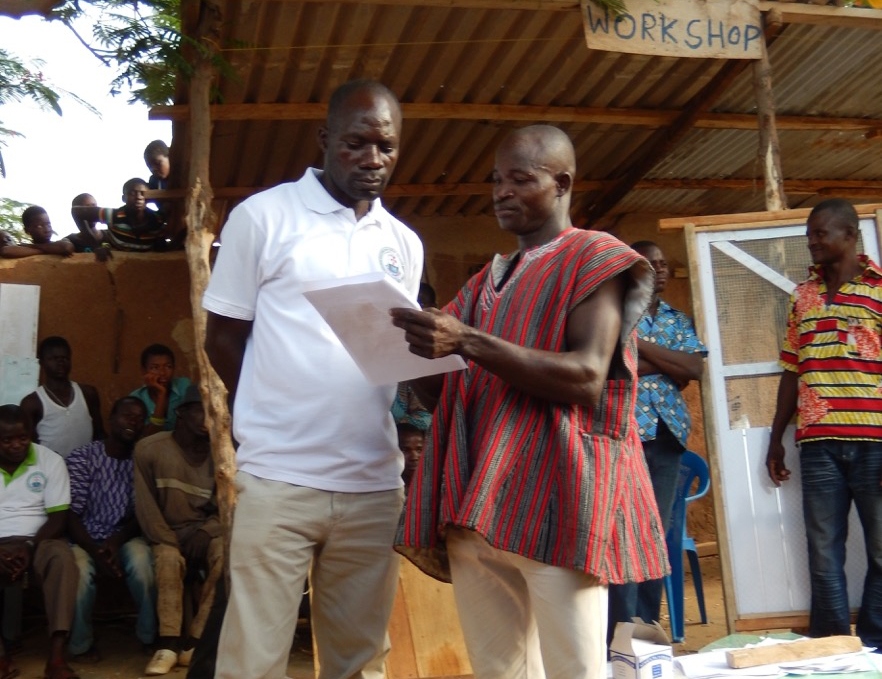 “Oh, we have to see the headmaster.”  Rob Radtke, Episcopal Relief & Development president

We were running late that afternoon. There were just too many excellent program partners for Episcopal Relief & Development in Ghana, an abundance of sustainable initiatives led by committed locals. Our planned itinerary had been overly optimistic. Episcopal Relief & Development president Rob Radtke assessed the remaining site visits we had scheduled. He said to our group of 18 enthusiastic pilgrims accompanying him, “Oh, we have to see the headmaster.”

I’ve been an Episcopalian long enough to know all about headmasters: distinguished, scholarly, old-school wise guys, surrounded by wood paneling and leather-bound classics. I looked forward to this visit, almost as much as our visit to the crocodile farm, an encounter that somehow called to mind my last vestry meeting.

So off we went, bounding down the bumpy dirt road, past the Soulmate Culinary Institute, the Thank You Father Natural Unisex Boutique, the Seek Jesus Key Cutting Service, and even beyond the God’s Grace Lingerie Shop (Ghana wins the best signage award!).  I even had time to debate the Bishop of Tamale over whether Star or Club Beer was the best in Ghana.

As we drove into the small town, I noticed an overly enthusiastic character wearing what looked like a purple leotard.  He reminded me of the beggar with disabilities we read about in the Book of Acts, the one healed by Peter at the temple gate, who went “running and leaping and praising God.” This dude was out of control, and I just hoped the Headmaster had the good sense to summon school security before things got out of hand.  As we disembarked our bus, Mr. Way-Too-Effusive embraced each of us as someone would greet the most important people on earth.  We had met the Headmaster.  And I began to understand why it was imperative that we see him.

We entered the Anglican Wood Works Training Center for Persons with Disabilities.  The headmaster, who has a hearing disability, told us his inspiring story. He had learned carpentry skills and had become one of the finest wood workers in Ghana. He then went door-to-door to the homes of disabled people whose families had hidden them, ashamed of their condition. The Headmaster told us that “Some Ghanaians do not see persons with disabilities as human beings.”  But John Awozo, the Headmaster, knows that God sees us all with different, appreciative eyes.  And John felt called to recruit these men and teach them carpentry skills. He’s become one of the country’s leading advocates for persons with disabilities. And he is now teaching (and housing) 31 students who might still be hidden in their homes if not for John. After they graduate, John will assist them in purchasing tools and setting up their own carpentry shops.

As he shared with us the good work of his school, the students stood proudly around him and beamed with a sense of self-worth. They took our photos. They smiled.  They shared their deep appreciation for our participation in this life-changing opportunity that is funded through Episcopal Relief & Development and our partners in Ghana. And I recognized I had met a man as wise as any on earth, a teacher whose knowledge surpassed that of the most hallowed halls of academia.

Before we left, he took my hand and looked me in the eye and said, “You are a celebrity to me.”  I will never forget that moment and the headmaster’s statement. I still have so much to learn about giving, making a difference, and serving God. But his words motivate me and remind me: when we give to Episcopal Relief & Development to partner with local communities, we mean more to them than we could ever imagine.  In fact, whenever you give to Episcopal Relief & Development, you are a celebrity to me.

William (Bill) Miller is currently Rector of St. Michael’s Church, Kauai, but soon will be moving to New Orleans to become Rector of Christ Church Covington. He is the author of The Gospel According to Sam: Animal Stories for the Soul and The Beer Drinker’s Guide to God: The Whole and Holy Truth about Lager, Loving, and Living. You can find him at www.fatherbill.net or www.facebook.com/williammillerauthor.

On Epiphany, January 6, a committee of deputies announced a campaign to raise $75,000 for Episcopal Relief & Development’s 75th anniversary campaign to learn more visit their website here.