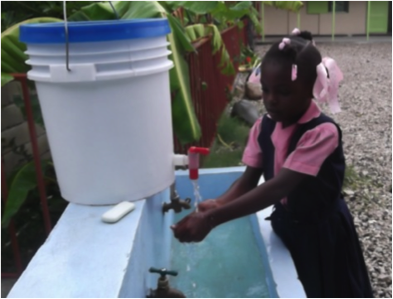 Seven-year-old Maryline lives with her family in Léogâne, 50 kilometers outside Port-au-Prince, in Haiti. Léogâne was extremely hard-hit by the January 2010 earthquake that shook the country, killing 300,000 people and leaving a million homeless.

In the aftermath of the quake, Episcopal Relief & Development worked with its local partner, the Episcopal Diocese of Haiti, and the Church’s relief and development arm, CEDDISEC (Centre Diocésain de Développement Intégré et de Secours), to organize relief and recovery work. With over 86,000 members, the Church in Haiti is the largest diocese in the Episcopal Church, and its schools and social care programs are renowned throughout the country. Maryline attends an Episcopal school in Léogâne that is participating in a program that goes beyond basic rubble removal and reconstruction – instead, it focuses on “green” innovations that can improve health and wellbeing.

With support from Episcopal Relief & Development, Maryline’s school and two others are piloting a program that combines renewable energy production with advancements in water, sanitation, hygiene, agriculture and reforestation practices. Facilitated by ACT Alliance partner Norwegian Church Aid, it involves mobilizing the students and the wider community to:

In school, Maryline had learned about the risks of using unsafe water, but when she realized how serious the consequences could be, she became an enthusiastic advocate at home for health and hygiene. Maryline reminded her father to always wash his hands before eating and asked her mother to make sure that the kitchen utensils were washed in clean water rather than in the irrigation canals near the family’s house. Maryline also took up the habit of preparing a bottle of treated water for her father to take to work, so he would not have to drink the water sold on his job site.

The children at Maryline’s school all helped spread the word to their families about the benefits of hand-washing and clean water, but it was up to the grown-ups to help people believe in the benefits of the other part of the school project: the bio-digester. Built underground, the bio-digester system requires ongoing maintenance to ensure proper function and prevent ground contamination or other health and safety concerns, and people were skeptical about whether it would be a help or a hazard. Getting the community on board is essential in any development project, so before any construction work began, Norwegian Church Aid facilitators helped the local project leaders understand the benefits of the system. This ensured that they would be personally invested in its management and upkeep, and enabled them in turn to educate the wider community.

Overcoming doubt was an ongoing process, but one that was well worth the effort. After the bio-digesters were built and began to work, the director of one of the schools took a sample of liquid fertilizer from one of the pilot sites and planted a patch of watermelons near the school grounds for all to see. At the first harvest, many of the same people who had expressed doubt were among the first to laud the quality and taste of the watermelons. It didn’t take long for word to spread that the melons grown with the bio-digester fertilizer were “pi dous,” (which means “sweeter”) than those grown with chemicals.

After seeing that their bio-digester fertilizer was both cheaper and more environmentally friendly than chemical fertilizers, the students and community members began working with the Episcopal Diocese of Haiti’s relief and development arm, CEDDISEC, on new agricultural and reforestation initiatives.

“The schools house the bio-digesters, tree nurseries and garden plots,” said Tammi Mott, Program Officer for Episcopal Relief & Development, “and the community members work alongside the students to manage the systems and use their products for greener fuel, greener gardens and greener hillsides.”

Thanks to the long-term community presence of the Church in Haiti, the activities conducted in partnership with Norwegian Church Aid and Episcopal Relief & Development enjoy a large degree of community investment and are able to have a sustained impact on the lives of families like Maryline’s. Episcopal Relief & Development will continue to support the Church as it helps the country build back better, with creative, locally led programs that promote health and build vital infrastructure.

“The Green Schools project is an example of a truly integrated program that engages and shares its many benefits with the whole community,” Mott continued. “We look forward to this year’s expansion to an additional eight schools and communities.”