Home | What We Do | Integrated Approach | Gender Equality, Women’s Empowerment & GBV | We Will Speak Out | When Raising Awareness Changes Lives 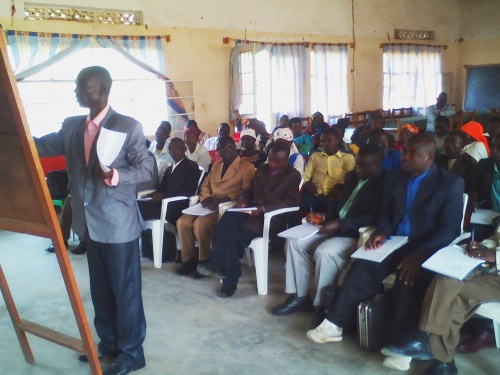 Mr. Folley, a 40-year-old community leader living in Gohn Town, Grand Cape Mount County, Liberia, used to domestically abuse his wife. He did not value her as a woman but rather saw her as his property, because her bride price was paid by him.

Mr. Folley withheld everything from his wife including money and would not help with home duties. If anything was lacking in the home, she would have to wait for him to get to it. He even refused to take her out with him because he believed women belong in the home and the man has the final say.

His wife complained about him to the elders of the town but he would not show up when they called upon him. Stuck in the house, she became so dependent on him and could not do anything for herself without him. Because of this, she had to accept anything wrong that he did to her. Sometimes he came home late at night. If she said anything, he refused to give her money for food the next day.

This habit almost led to the death of one of their daughters. She was sick and – with no money to pay for medical care – started to convulse. Through the kind gesture of one of a community member the child was rushed to the hospital but the incident did not make a change; instead, the situation in the house remained as before, the man in control. Occasionally, family and community members helped look for a solution but to no avail.

For years Mr. Folley felt that he was exercising his right as a man and the head of the home, until recently. Local religious leaders in the community started creating awareness and sensitizing people to Gender-Based Violence (GBV) response and prevention – speaking out in the churches, mosques, and town meetings, and also settling family matters using Bible and Qu’ran references to educate on violence against women.
Learning what the Bible and Qu’ran say about treating women, Mr. Folley realized that he had been violating his wife and he needed to change – to treat her with respect. He felt guilty and asked his wife for forgiveness and promised never to repeat such things but to live as one family. He also went to the community and asked for forgiveness for not listening to their advice. Since then, he has been an agent of change in the community.

Click to learn more about We Will Speak Out, 16 Days of Activism, and how you can spread awareness about Gender-Based Violence.

Story 1: Running Alone Away From Shame