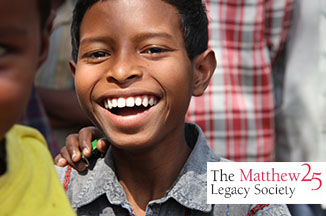 With deep appreciation, we recognize those whose generosity is making a difference in the lives of people around the world, supporting them as they strive to build a better future.

Below are several stories about how planned giving options enabled donors to both meet their financial needs and support people in poverty worldwide.

Please contact us to learn more at plannedgiving@episcopalrelief.org or 1.855.312.4325.

Carol Anne Brown, active Episcopalian, former Episcopal Relief & Development Board Member and member of the Matthew25 Legacy Society recently said, “Being as involved as I have been, and continue to be, is a great joy!”

To take their commitment to our work one step further, Carol Anne and Don became members of the Matthew25 Legacy Society in 2005, when they included Episcopal Relief & Development in their estate plans. Through planned giving, members of the Matthew25 Legacy Society help ensure that Episcopal Relief & Development can continue its important work for years to come.

“I was very pleased to discover that, based upon my age, a gift annuity would pay 8%. Plus, there would be a good tax deduction and part of the income would be tax-free.”

Valerie is a retired high school English teacher. She has been a careful saver and has a number of certificates of deposit (CDs).

“Over the past three years, the return on my CDs has declined significantly,” Valerie said. “I have looked carefully, but there just aren’t any CDs with a good rate of return — and I’m also interested in a secure return. I want to know that a good return will be paid. The ideal choice for me would be a secure high return.”

Valerie talked with a friend, who had found exactly that choice: The friend set up a gift annuity with her favorite charity. Valerie thought that perhaps the gift annuity would be helpful for her, too.

“I called the Episcopal Church Foundation and asked about a gift annuity,” Valerie said. “I was very pleased to discover that, based upon my age, a gift annuity would pay 8%. Plus, there would be a good tax deduction and part of the income would be tax-free.”

After finding out how to set it up, she transferred money from a mature CD into a charitable gift annuity. She was also excited to learn that the charitable deduction would save her over $3,000 in taxes that year. Valerie’s fixed payments from the gift annuity are about two times what she was receiving from her one-year certificate of deposit. She is delighted with the increased income and charitable savings.

Remembering the Work in the Future

Gail and Jim Graham understand the importance of the work Episcopal Relief & Development does around the globe to tranform communities.

“The next generation of Christians will of course take their turn supporting Episcopal Relief & Development. However, there will always be a need for a reserve fund to draw on immediately in a crisis and our gift annuity can help in a small way to undergird this. While we depend more on our pensions than on interest payments, this annuity does provide a guaranteed rate of interest that is much higher than banks are offering now.”

“Our children are supportive of our making this gift.”

For many years, Gene and Carol had talked about taking part of their stock value and putting it toward a lake home.

Gene and Carol are avid fishers. They own a boat and keep it in a boathouse that belongs to their friends. For many years, they had talked about taking part of their stock value and putting it toward a lake home.

They checked with their CPA to get his suggestions. Knowing that Gene and Carol were very involved in their Episcopal Church, he advised them to contact Episcopal Relief & Development about planned giving options.

“We were happy to discover that we could transfer $280,000 worth of the stock into a special trust — a unitrust. When we transferred the stock into that trust, it was then sold tax-free,” explained Carol. “Best of all, we were able to sell the other $120,000 of the stock for cash. The deduction on the charitable trust saved enough in taxes so that we did not have to pay tax on the $120,000. The full $120,000 was available and we could purchase our lake home.”

“This was a wonderful agreement,” Gene agreed. “I am pleased that we were able to set up the trust. We now have income from our unitrust, we are enjoying our new home, and we love having the opportunity to go fishing whenever the mood strikes.”

Knowing that the kids had no interest in living on the farm, Jack and Wanda had to decide what would happen to their land after they were gone.

Jack and Wanda live on a large farm where they grow vegetables and raise a wool-producing herd of sheep. With its rolling fields, deep green pastures and tree-lined stream, the farm has always provided a fulfilling and satisfying life for the couple.

By watching their budget and saving their profits, they were able to send their two children to college. After graduation, the children moved to the city and developed successful careers. Neither of them had an interest in returning to work on the farm.

Knowing that the kids did not want to live on the farm, Wanda and Jack had to decide what would happen to their land after they were gone. With its pastoral beauty, the land would certainly appeal to anyone seeking the rural life. The farm’s value had increased over the years, enhanced by the nice house and barn that Jack built.

The couple gave serious thought to the people and charities they wanted to remember in their wills. They were concerned that the process would involve complex legal documents and expenses. However, when Jack and Wanda met with their attorney, she explained that wills are relatively simple documents that are cost-effective to prepare – and the wills could take care of all their planning goals. With the attorney’s help, the couple wrote their wills and divided the property between their two children and Episcopal Relief & Development.

Jack and Wanda are now assured that their children will enjoy the results of their prosperous farm. And they are happy to leave a legacy to Episcopal Relief & Development. They even got to specify how the money would be used, so they know the bequest will benefit a cause close to their heart: Their gift will help struggling farmers become successful.

Bonnie and David had been exchanging Valentine surprises throughout their 20-year marriage. Both had successful careers, David as a commodities broker and Bonnie as a pediatrician.

Bonnie’s parents, Mr. and Mrs. Swanson, had skimped and sacrificed to help her get through medical school. Now they lived a simple life, and Bonnie and David were always there to help when necessary. The Swansons had never traveled much, but they hoped someday to visit Hawaii.

David and Bonnie realized that Mr. and Mrs. Swanson’s 50th wedding anniversary was quickly approaching. That year, instead of giving each other gifts, the couple decided to surprise her parents with their dream vacation.

But in speaking with their financial advisor, they learned about an even more meaningful and long-term gift for the Swansons — a charitable remainder trust, providing them with a lifetime income to supplement their dwindling retirement funds.

When Mr. and Mrs. Swanson arrived in Hanalei, on the island of Kauai, so did Bonnie and David. They presented a lasting gift that benefited both the Swansons and Episcopal Relief & Development. All four agreed it was truly a wonderful Valentine’s Day — and one they would never forget.