Letter From The President

This year, powerful earthquakes hit Japan and Ecuador, causing loss of life and massive damage to property. Such events remind us of our vulnerability and underscore the critical importance of preparedness, response and recovery.

I recently traveled to Nepal, Japan and Haiti, to assess the long-term work of recovery from similar events in the past.

It’s been more than a year since the Nepal earthquake, in which 8,000 people lost their lives … five years since the Japan earthquake and tsunami, which killed 15,000 people and left 200,000 people displaced … and six years since the Haiti earthquake, when between 100,000 to 316,000 died. While each disaster is unique, lessons can be drawn from how communities and authorities have reacted to these natural disasters.

First is the critical importance of a national and local government that is responsive to and trusted by its people.

In just one example, governance challenges in Haiti continue to undermine recovery, stymying rebuilding efforts because of spotty or non-existent records for land ownership. Even here at home, we are not immune from government inaction or incompetence. Just look at the lead contamination emergency in Flint, Michigan.

Second is the power of building a culture of disaster risk reduction, including preparedness efforts before disasters strike and investment in long-term recovery after they happen.

Prone to earthquakes and tsunamis, Japan has driven significant advancement in construction technology and building codes, and education about what to do in a disaster is part of daily life. But even the most sophisticated governments and infrastructures are vulnerable to disasters. We must study past disasters and learn from them.

Third is how local churches and non-governmental organizations (NGOs) can support preparedness recovery and rebuilding.

Governments can’t do it alone. There is a vital role for NGOs and for faith-based ones in particular. Churches and other faith communities are often the only reliable social institutions in remote and underserved areas.

A harbor of safety and welcome

In Japan, one woman shared her earthquake story with me. A Buddhist, she had lived her entire life near the local Episcopal church, but she had never visited it.

At the time of the earthquake, she had been out doing errands. Once the tremors stopped, she raced home to check on her family. As she arrived, she turned towards the ocean and saw the huge tsunami coming. She immediately ran up the hill to the church and sought sanctuary. She watched from the churchyard as her entire life was swept away.

She is deeply grateful for all that the church did for her that day and for all that it continues to do to this day. The Episcopal Church in Japan has a vibrant and important ministry among those who continue to be displaced today.

I am very thankful for our partners in Japan, Haiti, Nepal and elsewhere, who are providing much-needed relief and helping communities recover. I am also deeply grateful for your generous support, which allows Episcopal Relief & Development to be a source of strength and welcome in the face of disaster. 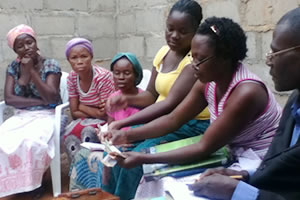 In the aftermath of war, impoverished countries face significant challenges. This is true in Angola, where the effects of a civil war lasting nearly three decades are still being felt. Although the war ended in 2002, the country’s infrastructure remains in disarray, and many areas lack the most basic necessities. More than 70% of the country’s population lives below the poverty line.

With the Church of Angola, Episcopal Relief & Development is assisting Angolans as they struggle to care for themselves and their families in such critical circumstances. We are supplying basic needs, including water and safe sanitation. And our NetsforLife® program is helping to fight Malaria and save countless lives.

These steps are crucial, but we want to go even further. Beginning in 2013, we began working with local dioceses and other development organizations to create savings groups that enable villagers to save money and take out loans to expand their small businesses.

Savings group members make weekly payments into a joint savings fund, and members can take out loans from the group. The savings groups are run entirely by the program participants, who decide on the rules and terms. At the end of the year, members receive all of their savings back, plus interest and additional income from any late payment penalties. So far, 100% of the loans have been repaid in full.

The program helps people achieve their dreams. One of the participants, a young woman named Arietta, took out a loan to build her business selling fruit. What she wanted most was to help her parents make improvements to their home. The first year, Arietta earned enough money to buy her own schoolbooks, allowing her parents to save money. She was also able to start a second small business, bringing in even more income.

Another participant, Antonio, took out a loan to build his business selling candy. His hopes were modest: as an elderly widower living alone, he just wanted to earn enough money to survive. One year later he received a payout of 15,600 KZ – about $95. He spent his money to buy school supplies for his five grandchildren who now live with him.

In 2014, 45 groups with 1,066 members accumulated savings and earnings that totaled $207,000. That was six times greater than the previous year. In 2015, the number of participants and dollars saved grew even more.

As this program grows, the savings groups have been an unqualified success, giving Angolans the tools they need to flourish and prosper – to nurture their dreams of a better future for themselves and their children.

It’s a basic necessity of life, so elemental that most of us take it for granted. But around the world, access to safe, 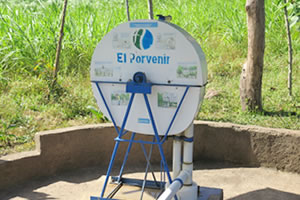 clean water is not a given. The quality of the world’s fresh water resources is threatened by a wide range of factors: improper sanitation, agricultural runoff, lack of treatment facilities, natural disasters, and environmental changes. The toll on human life is extreme. Every 15 seconds, a child dies from a water-related disease.

Episcopal Relief & Development is committed to ensuring that clean water is accessible in even the most rural areas, by helping communities develop sources of clean, safe, accessible water.

In Nicaragua, we work with our partner El Porvenir in communities throughout the country on integrated water, sanitation, and hygiene programs to improve health and quality of life.

Zeneyda is a resident of El Chaguite, a rural area to the north. Before a well was built in her area, she got up at 4 a.m. and walked for 20 minutes every day to collect contaminated water from a nearby creek. Dirty water was better than no water at all.

Without latrines, people in her community often had diarrhea, especially young children. Zeneyda has had three miscarriages caused by the toxoplasmosis parasite, due to fecal contamination on her hands.

But since the building of the well, life has radically improved. Zeneyda told us, “We have worked with this organization in the building of a community well and in the construction of latrines in every home . . . to have a better quality of life.”

Our water programs are part of an integrated strategy that focuses on preventing the spread of disease while promoting overall health and well-being. Wells, water systems, and stations are constructed based on local assessments of needs and capacity, and we provide critical education on how to maintain them. In addition, we help build latrines and promote sanitation and hygiene education.

The benefits are clear. With these systems in place, health improves. Girls and women no longer have to spend hours collecting water from polluted lakes, rivers, and streams near their homes. Girls can go to school, and women are able to care for their families, pursue education, and obtain employment – creating a better future for themselves and their entire communities. 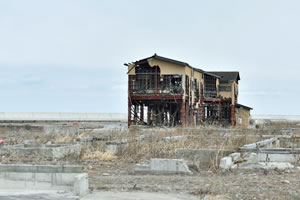 Many of the hardships we address are chronic and ongoing, but Episcopal Relief & Development regularly responds to crises in the United States and worldwide. Currently, we are offering pastoral care and aid for immediate needs to residents of Ecuador and Japan devastated by earthquakes in April.

Here are just a few additional examples of how your support works through Episcopal Relief & Development in times of special need:

In Southern Africa, the current drought is considered the worst in 30 years. Sources of drinking water are drying up, leaving humans and livestock to compete for limited water sources. Episcopal Relief & Development is responding to this crisis by working with diocesan teams in the worst hit regions to provide relief items of basic food parcels and potable water.

The El Niño effect has taken a toll on several regions in Tanzania, bringing an early end to the rainy season. We’ve partnered with the Diocese of Kagera on a mass reforestation project of 15,000 trees to strengthen soil cover in landslide prone areas. We’re also working with the Diocese of Central Tanganyika for the provision of more than 26,000 pounds of food to 300 of the most vulnerable farmer families.

In Texas, as much as 20 inches of rain fell overnight in the Houston area this past April, killing 8 people, flooding more than 1,100 homes, and causing upwards of $5 billion in damage. The Episcopal Diocese of Texas is responding with spiritual care and help for those applying for aid and navigating the recovery process. With Episcopal Relief & Development’s support, assistance will be available for immediate housing and emergency needs.

SUSTAINING CARE FOR THE WORLD

Every day we heed Jesus’ call in Matthew 25 to feed the hungry, care for the sick and welcome the stranger, as we 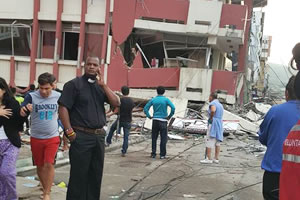 help communities around the world reach their full potential.

Many compassionate Episcopal Relief & Development contributors have chosen to become members of our Sustainers Circle, whose regular monthly gifts ensure our readiness when we’re needed, where we’re needed…and guarantee that we’re in it for the long haul.

Please join this group of special friends today. Your monthly donation will give Episcopal Relief & Development a consistent and much-needed source of dependable support to fund new projects and quickly respond to disasters.

Your monthly gifts will be tax deductible and you can revise your commitment at any time. Don’t hesitate – please join the Sustainers Circle today!