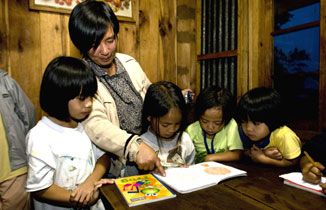 Learn more about the issues of poverty and development with these resources from Episcopal Relief & Development and well-known experts in the field.

We recommend the following books to help raise awareness about the importance of development in addressing poverty and disease worldwide:

An American Awakening: From Ground Zero to Katrina the People We Are Free to Be by Courtney Cowart

Being Consumed: Economics and Christian Desire by William T. Cavanaugh

Better: A Surgeon’s Notes on Performance by Atul Gawande

The Bottom Billion: Why the Poorest Countries are Failing and What Can Be Done About It by Paul Collier

Crazy Christians by The Rt. Rev. Michael B. Curry

Development as Freedom by Amartya Sen

Fling Out the Banner: The National Church Ideal and the Foreign Mission of the Episcopal Church by Ian T. Douglas

Globalization and Its Discontents by Joseph Stiglitz

Inheriting the Trade: A Northern Family Confronts Its Legacy as the Largest Slave-Trading Dynasty in U.S. History by Thomas Norman DeWolf

Micah’s Challenge: The Church’s Responsibility to the Global Poor by Marijke Hoek and Justin Thacker.

Money & Faith: The Search for Enough edited by Michael Schut

Monique and the Mango Rains: Two Years with a Midwife in Mali by Kris Holloway

Pathologies of Power: Health, Human Rights, and the New War on the Poor (California Series in Public Anthropology) by Paul Farmer

Regarding the Pain of Others by Susan Sontag

The Bottom Billion: Why the Poorest Countries are Failing and What Can Be Done About It by Paul Collier

The End of Poverty: Economic Possibilities for Our Time by Jeffrey Sachs

The White Man’s Burden: Why the West’s Efforts to Aid the Rest Have Done So Much Ill and So Little Good by William Easterly

Toxic Charity: How Churches and Charities Hurt Those They Help (and How to Reverse It) by Robert D. Lupton

Walking with the Poor by Bryant Myers

Please note that Episcopal Relief & Development does not necessarily endorse or agree with all statements, perspectives and arguments offered by the authors. The readings are suggested to spark discussion about these critical issues.