This year Episcopal Relief & Development’s Provincial Coordinators are sharing their reflections on select devotionals from the 2013 Lenten Meditations booklet. In this blog Melanie Stewart looks at the Lenten meditation from Sunday, March 17, 2013, page 40. Below is the scripture being referenced and to the right you can click the image to download and view the whole meditation. 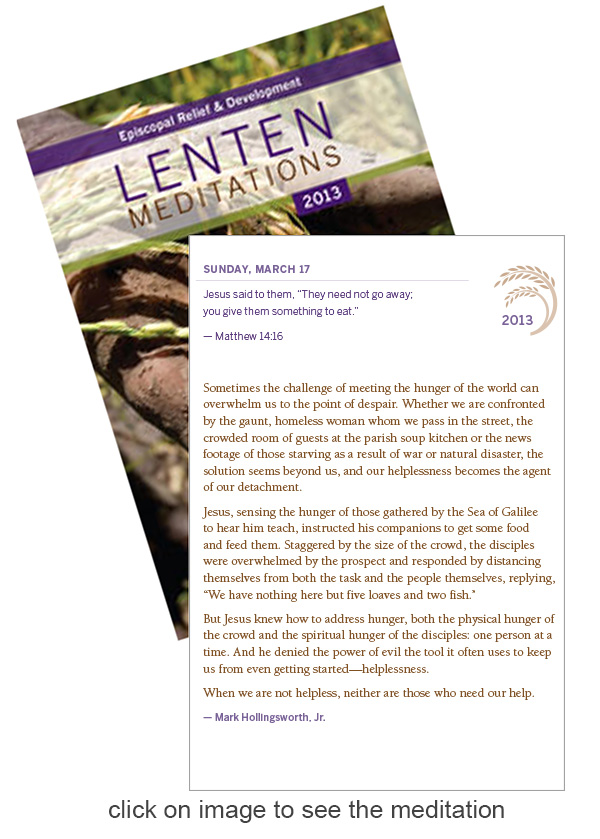 Jesus said to them, “They need not go away; you give them something to eat.

As I read The Rt. Rev. Mark Hollingsworth’s meditation for March 17th, two experiences came to mind. My husband is the executive director for the Hospitality Center in Racine, WI, which provides a place for rest, relaxation and refreshment for the homeless and near homeless during the day. He works daily with those who are most disenfranchised, and the number of those served has increased to approximately 160 people a day. Each day they provide a lunch. When they started, they served 15 a day, but as the numbers grew to reach up to 180 a day the amount of food needed grew exponentially. This past summer, the pantry was nearly empty and he sent a call out for bread. Jesus did the same that day by the Sea in Galilee when he sent his disciples out to feed the people. From five loaves and two fishes, they fed the multitude. Well in Racine, WI near the shores of Lake Michigan bread came in, boxes full, bags full, until 5 freezers were full and tables were overflowing with bread. We only needed to ask and have faith for God to bestow his grace. The miracles continue and the pantry is rarely bare at the Hospitality Center….God keeps helping us feed our multitudes, day by day, one by one.

The second experience I recalled after reading this meditation was my trip with Episcopal Relief & Development to Nicaragua in November 2011. During the study trip, we visited several garden projects. These gardens have been developed by individuals who were trained on planting, growing and developing a living for themselves and their families. The garden project that most impacted me was the home of Griselda and Pascual Jarquin in La Cañada. With hard work and faith in God, Griselda and Pascual grew a veritable Garden of Eden, flowers, fruits, spices and vegetables. The beauty of their garden was breathtaking. That we were witnessing a miracle occurred to me the next day, when we saw a picture of the same place three years previously. The land was barren. The ground was covered with boulders, little grass grew, and what was growing was wild. In three years, what was barren and desolate became, with hard work and God’s grace, a place of beauty and bounty. Mark wrote that “Jesus knew how to address hunger, both the physical hunger of the crowd and spiritual hunger of the disciples: one person at a time.” What I see today is Jesus continuing to address hunger of all types, one person at a time. We just need to have faith and believe that the grace of God’s miracles occurs today.

Melanie Stewart is an Episcopal Relief & Development Coordinator for the Diocese of Milwaukee and Province V.