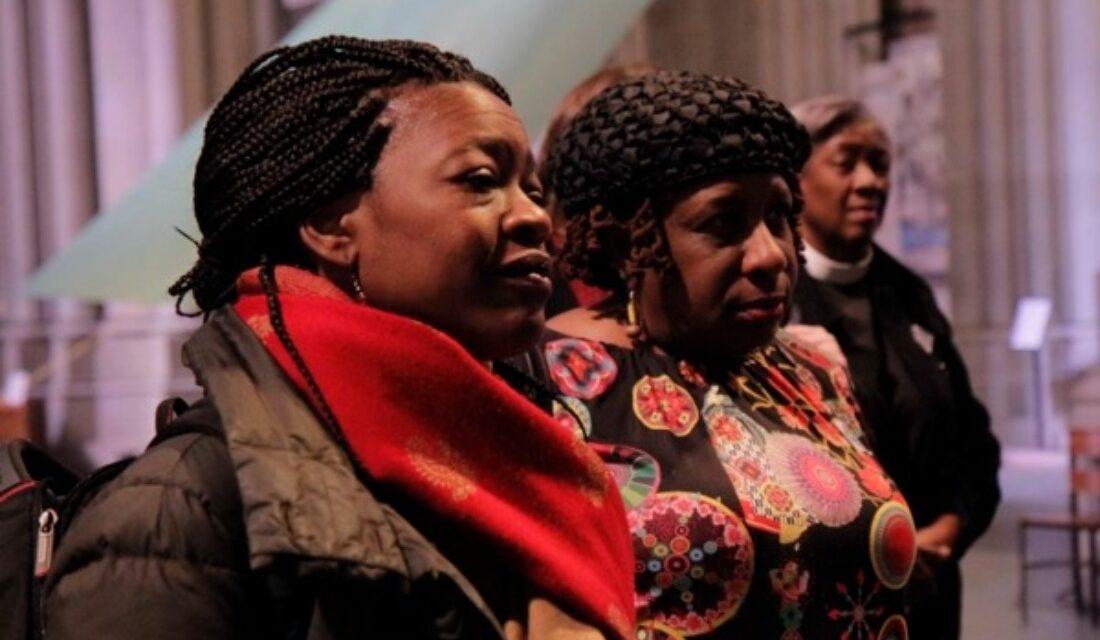 Episcopal UNCSW delegates Chiseche Mibenge, Diocese of El Camino Real, left, and Michele Roberts,  Diocese of Delaware, center, pray together at the Cathedral Church of St. John the Divine in New York while the 63rd annual United Nations Conference on the Status of Women is underway at the U.N. headquarters in 2019.

Dear God, creator of the heavens and the earth, we pray for all who have gathered globally to observe the 16 Days of Activism Against Violence Against Women.

Help us to see one another through eyes enlightened by understanding and compassion.

Release us from prejudice so that we can receive the stories of our sisters and brothers with respect and attention.

Open our ears to the cries of a suffering world and the healing melodies of peace.

Empower us to be instruments in bringing about your justice, peace and equality everywhere.[1]

The United Nations has organized four world conferences on women. Each produced a political declaration.

The Beijing Declaration and the Platform for Action is a key global-policy document that sets strategic objectives and actions for the advancement of women and the achievement of gender equality. In preparation for that conference, members of the Anglican Mothers’ Union and Episcopal churches met frequently to identify their priorities.

During the conference, the women’s consultation included a daily noonday prayer — an important pause amid long days of debate about ecumenical women’s priorities for gender equality. Twenty-six years after the conference, women around the world continue to use this communal prayer, adapted to their circumstances. The prayer above is an adaptation of that prayer. We invite you to coordinate a noonday prayer with members of your faith community.

The presiding bishop’s delegation to the U.N. Commission on the Status of Women facilitated an online study group — Beijing +25: Celebrating the Blessing, Realizing the Dream — to review the Beijing Platform for Action and publish reflections about the 12 areas of concern the platform raised.

Read more about The Episcopal Church’s continued advocacy for women’s rights in the Episcopal News Service.