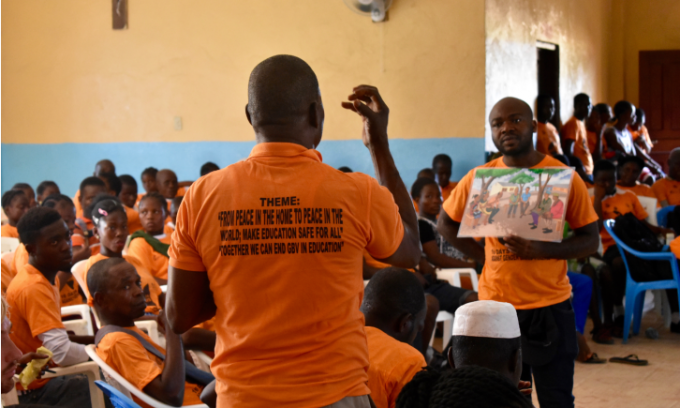 Faith leaders in Liberia engage men and boys in examining the root causes of GBV and work to dismantle them as part of Scaling Up Faith Leaders Engagement to Prevent and Respond to VAWG.

Episcopal Relief & Development and the humanitarian arm of the Episcopal Church of Liberia (ECL-RD) were awarded a second $670,000 three-year grant from the UN Trust Fund to End Violence against Women (UN Trust Fund) to expand a gender-based violence prevention and response project in Liberia.

Working with local Anglican and ecumenical partners, Episcopal Relief & Development is focused on creating long-term solutions in three key priorities: Women, Children, and Climate. The organization’s work with women concentrates on helping to promote the rights and safety of women and children so that communities can grow and thrive. In Liberia, a partnership with the Church of Liberia, Scaling Up Faith Leaders Engagement to Prevent and Respond to Violence against Women and Girls (VAWG), works to reduce intimate partner violence and increases access to services for women in rural settings. The program builds on the success of an earlier pilot program that was supported by the UN Trust Fund and Islamic Relief USA, among other funders.

“Violence against women and girls is a global epidemic, and is often more severe in post conflict countries like Liberia.  Everyone should live a life free from violence and be granted dignity and respect,” said Kirsten Muth, Special Advisor, International Programs at Episcopal Relief & Development. “Through our partnership with Christian and Muslim faith leaders, we are working to change that.”

Liberia is considered one of the most dangerous countries in the world for women and children. More than 50% of Liberians live in poverty and Liberia has some of the highest rates of violence against women and girls in the world. According to the United Nations, 39 percent of women experience physical or sexual intimate partner violence.

“This grant will enable us to expand our resources and outreach to make a greater impact in changing attitudes towards women. We appreciate the recognition of the value of engaging faith communities to serve as a force for transformation in their communities,” said Annette Musu Kiawu, the ECL-RD National Director.

The UN Trust Fund to End Violence against Women (UN Trust Fund) is the only global grant-making mechanism dedicated exclusively to addressing all forms of violence against women and girls at the local and national levels. Managed by UN Women on behalf of the UN System, the funds raised support initiatives that have a specific and sustainable impact.