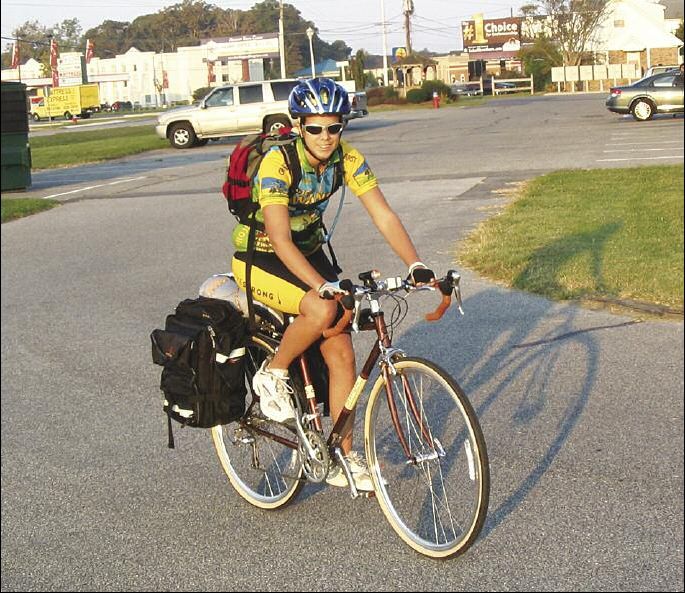 While there is no obvious connection between a 780 mile bicycle trip along the Eastern Seaboard of the United States and eliminating malaria halfway around the world, the willpower and ingenuity of one woman forged a link between those two dots.

Abby, a 22-year old recent college graduate from Rehoboth Beach, Delaware and the daughter of a parishioner at All Saints’ Church and St. George’s Chapel there, had recently purchased a bike and a had desire to visit her sister in South Carolina. She had just completed her first triathlon and wanted to push herself a little further while spending some time reflecting on the direction in which she’d like to take her life. A very long bike ride seemed like a great way to do both.

When Abby learned about the Diocese of Delaware’s plan to send one net to Africa for every family in the diocese she decided to use her bike trip as a way to raise awareness about and generate support for NetsforLife®, a program of Episcopal Relief & Development that delivers long-lasting insecticide-treated nets to vulnerable people in remote parts of sub-Saharan Africa, and also provides training on how to use the nets.

Malaria is one of the biggest killers in the developing world. It is caused by a parasite transmitted through the bite of an infected mosquito. As mosquitoes bite primarily at night, sleeping under a long-lasting insecticide-treated net is the best way to prevent the transmission of malaria. Unfortunately, most of the millions of people who are vulnerable to malaria in Africa do not have access to an insecticide-treated net.

As nets are shared by family members, one life-saving, insecticide-treated net can save three people from needless suffering. Abby decided to try to raise one dollar for every mile she cycled, with the ultimate goal of purchasing 67 nets.

A life-long Episcopalian, Abby knew how the church ‘welcomed the stranger’ so she contacted Episcopal rectories on her route to secure lodging before heading out in mid-October of last year. When she reached her destination of Sumter, South Carolina Abby felt as though her life had changed. “I had so many angels along the way,” said Abby. These included the people who hosted her, prayed for her and helped her fix her bike during her two week journey.

Abby is a true friend of Episcopal Relief & Development. To date her inspirational journey has raised close to $1,600.00 for NetsforLife® , doubling her initial goal. Contributions have come in from All Saints Church and St. George’s Chapel parishioners, as well as from people who learned about her trip along the way. Abby’s initiative has saved countless lives and raised awareness about a deadly disease that takes the lives of one million African children every year.

Abby sums up her trip as such, “All the setbacks –flat tire, car accident, bad weather, etc. really just let me understand that I was doing this journey on God’s time, not my own time. A realization which I have been able to take away and apply to challenges I’ve had since the bike journey.”

Click here to learn more about our Netsforlife® program and how you can help prevent malaria in sub-Saharan Africa.