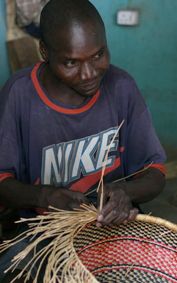 Sean McConnell, the Canon for Communications in the Episcopal Diocese of California, visited Ghana this week to tour field projects implemented by the Anglican Diocesan Development and Relief Organization (ADDRO), a partner of Episcopal Relief & Development. This post is adapted from Sean’s travel blog, which aims to share his experiences with fourth- and sixth-graders in Northern California.

Later in the afternoon we saw some of the people with disabilities who are given training in job skills from ADDRO’s Community Based Rehabilitation (CBR) program. People in this program would not usually be able to work for a living, but CBR gives them the skills they need to earn decent pay.

Nsoh Akaboti is a cobbler and basket weaver who has been helped by the CBR program. Nsoh was stricken with polio and his legs cannot support him. He sits on the floor of his shop and weaves baskets and mends shoes. The amount of money he makes on his baskets is 150% the cost of the materials to make them. The basket he is making looks rough in this photo, but when he is done it will look like a finished product. Nsoh is a true artist and works very hard to make an excellent product. He has also received a small loan from ADDRO to purchaseenough materials to get started in business. He will eventually earn enough to pay back his loan and to continue his business without the support of ADDRO.

Another business person who has benefited from the CBR program is Veronica Mba. Veronica, who is blind, is a rice processor. When rice is harvested, it has a thin husk around it that needs to come off. In order to get rice ready to eat, it has to go through a process that includes drying, parboiling and drying again. (Parboiling means to boil the rice just long enough to soften the husk so that it comes off easily, but not long enough to cook it.) The rice in this picture is the finished product after Veronica has processed it. Through CBR, Veronica learned how to do all of the steps of rice processing.

Veronica works hard and has become successful in her business. Because of this, she has gained the respect of her neighbors and community. In January of this year, Veronica was elected as a District Assembly Member for the community of Adaboorobiisi.

Veronica’s husband, who is also blind, received a micro business loan from ADDRO to purchase two goats. When the goats had babies, he was able to sell two of the kids and raise the money to pay back his loan. He had three goats left over from the first litter that will eventually produce enough milk for him to sell and earn even more money.

With ADDRO’s assistance, disabled people who might not otherwise be able to earn a living are supporting themselves and their families through learning new skills and launching successful businesses.

———-
Sean McConnell is the Canon for Communications in the Episcopal Diocese of California.