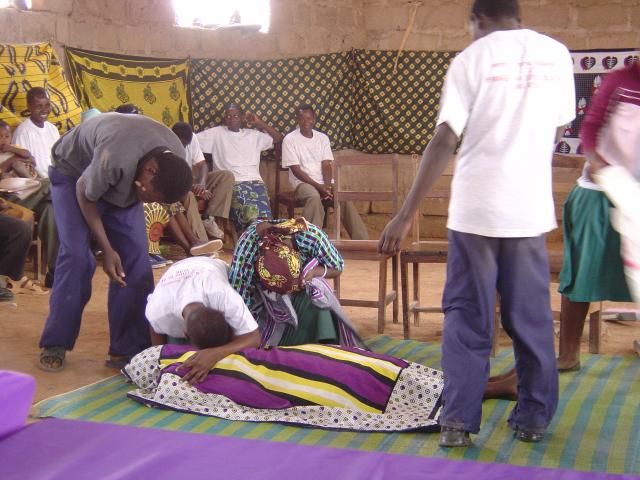 BCC, OVC, GAD, PMTCT*… what do these mean?! In the field of international development we have so many acronyms that your head can spin just trying to remember them all! BCC — behavior change communication — is one I want to address and illustrate what it looks like on the ground.

In Tanzania, Episcopal Relief & Development partners with the Diocese of Central Tanganyika. On my recent trip there , part of my time was spent reviewing and monitoring the Community Health Education Program (CHEP—yes, another acronym!) run by the diocese..

I was able to attend the Ndebwe Village Health Fair Day, a day for teaching the entire community that was the culmination of the health, hygiene and sanitation lessons learned over the past year. Forty volunteers from the two pilot villages were trained in preventing illness such as malaria and HIV/ AIDS, and in clean water and sanitation practices. The volunteers then educated 250 children and their guardians throughout the year on these issues.

During the health fair, a variety of community groups (secondary school girls and boys, Mothers Union, etc.) had our toes tapping as we heard new songs written for the event about how to protect yourself from contracting HIV, boiling water for safe drinking and sleeping under a net. These were catchy tunes that we later heard the children singing after the show!  Think about the songs you learned as a child and how they taught you lessons—does ”Conjunction Junction” ring a bell?

The biggest crowd pleaser (and it was a crowd of 500+ people) was the malaria treatment drama put on by the high school group. The drama was about a young girl who contracts malaria. The mother takes her to the health clinic and she receives treatment –a pack of pills that must all be taken. By day two of the treatment, the girl feels better so her mother throws the pills out and she goes off to school. Since the malaria was not truly treated, the girl is brought home from school sick again. She is then taken to traditional healers who perform a ritual in order to cure her. This does not work and in the end the girl dies.

The young adults did an amazing job of capturing the way life is in their village. Even though I don’t speak Chigogo, the local language, I was still captivated along with the entire audience. The drama mimicked real-life scenarios so well that you could tell the audience members were seeing themselves in many of the characters and internalizing the very strong and sad message—a story they probably know all too well.

Over the next few months and year, we will continue to work with the program manager to evaluate whether behaviors are changing and the communities are adopting the new practices they’ve learned.