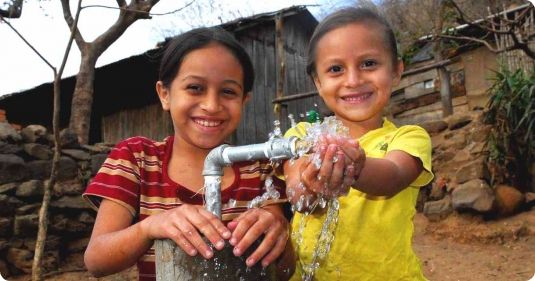 More than a billion people around the world do not have access to clean water. This means that families must fetch the water they need for cooking, bathing and drinking from polluted lakes and rivers that are often far from their homes. This has grave repercussions for community health worldwide: one child dies every 15 seconds from a water-related disease.

To meet the needs of these communities, Episcopal Relief & Development is partnering with the community-based, Nicaraguan-run organization El Porvenir. Founded by an Episcopal retiree, El Porvenir facilitates the construction of latrines and fresh water wells, in addition to providing health education.

“In remote Nicaraguan communities, lack of clean water is one of the major obstacles that people face,” said Matthew St. John, Episcopal Relief & Development Program Officer for Latin America and the Caribbean. To help overcome those obstacles, the partnership is working in the municipalities of Camoapa and San Lorenzo – transforming lives in over a dozen communities.

To ensure community commitment to all projects, programs begin only when a community representative contacts El Porvenir with a request for help. The partnership provides guidance during the formation of a community water committee, which oversees projects and coordinates volunteer participation. Working with the community, the partnership determines the best method of delivering clean water to the area. Common practices include disinfecting and installing a pump in existing hand-dug wells and using a water capture system that delivers water through public and private water taps.

Access to clean water has a large impact on the lives of those in San Lorenzo and Camoapa. Rather than walking miles to fetch water, women are now able to get water close to their homes, saving them time and energy. They can also use newly created public washing stations for bathing and washing clothes. This not only reduces the number of skin infections caused by bathing in polluted river and lake water, it also promotes women’s safety.

“By using the community washing stations, women avoid the sometimes dangerous trek to available water sources,” said St. John. “Now they don’t have to worry about falling as they traverse rocky roads to fetch water, or about being harassed when they’re off on their own. The washing stations also create greater community cohesion – women can bring their small children and work closely with one another as they perform daily chores.”

The program uses community involvement in all stages of the water projects, and the entire village is encouraged to share the responsibility for the upkeep of the public wells and washing centers. By ensuring that all community members feel a sense of ownership, it is more likely that they will be able to maintain the new facilities.

Another important element of this program is providing access to sanitation systems. The majority of people in these remote areas lack latrines, and those that do have access to them are unfamiliar with the practices necessary to keep them clean.

The Murillo family of Camoapa was having serious health problems because of the unsanitary conditions of their latrine, which they did not clean because they thought that the wood would rot if it was wet. Maria Murillo said that simply using the dilapidated structure was a daily challenge and that her children were constantly ill as a result of the unhygienic conditions. During her community’s participation in the project, Maria’s family received a new latrine. They were also provided with training on its upkeep and education about basic hygiene. Maria reported that her family is now much happier and healthier: “We feel that our lives have changed.”

However, simply providing access to clean water and sanitation is not enough. “The greatest challenge is education,” said Oneida, a Water and Sanitation Promoter for El Porvenir. “Convincing people to change their habits is the most important thing.”

Classes about basic hygiene help promote community health and give residents the tools they need to make the most of their new resources. In addition, children are being taught at a young age about hygiene and the importance of clean water. Following the Murillo family’s participation in these classes, Maria Murillo said, “The most important thing we have gained is a new awareness of how to prevent disease and lead a healthier life.”