Home | Stories | A Harvest of the Arts, for Haiti

A Harvest of the Arts, for Haiti

Once in a while, I’ll get a phone call out of the blue that winds up being a great story.  I have the Rev. Dr. Erin Kirby to thank for this one.

Reverend Erin, as she is known in her parish, was a member of Episcopal Relief & Development’s Seminary Network during her time at the Church Divinity School of the Pacific in Berkeley, California.  Before being called as the Rector of Trinity Episcopal Church in Shrewsbury, Massachusetts, she had spent a year as a Junior Dean at a Church of England seminary just outside Oxford. There, she had a chance to participate in harvest celebrations – a long-standing tradition in England – and learn how congregations of all kinds can bring their “first fruits” to God.

Shrewsbury is not a farming area, so rather than pumpkins and cornstalks, people offered up something that the town has in abundance: artistic talent. The idea for a “Harvest of the Arts” grew out of a conversation that Reverend Erin had with Myriam, a woman from a neighboring congregation who teaches dance in Trinity’s parish hall during the week.

Myriam is from Haiti and her passions in life are her art and her family. Talking with her mother in Port-au-Prince, Myriam heard that schools still aren’t completely open since the 2010 earthquake and subsequent hurricanes.  Many children are without school rooms and materials, as teachers work in tents and makeshift structures to help them continue their education.

Myriam wanted to use her art to give back to her community, and she found enthusiastic support from Trinity’s music director and a parishioner who is working toward her MFA. They formed a committee and started talking to other artists in Shrewsbury, who were excited to have a venue where their art could have an impact beyond the immediate audience. 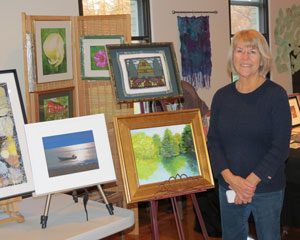 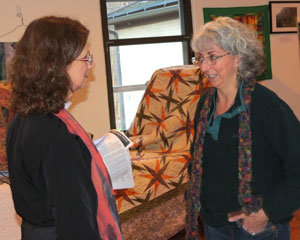 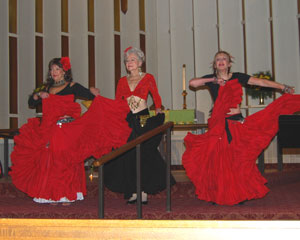 After thoughtful planning and preparation, Trinity celebrated its Harvest of the Arts on November 17.  There was space in the sanctuary for performances by the youth liturgical dance group from Myriam’s church, the Trinity church choir, a parents-and-kids improvisational dance workshop, and a group of Lutherans who brought the hilarity of P. D. Q. Bach.  Later, a candlelight procession brought people into the parish hall, where a local artists’ guild had set up a gallery space.

The artists agreed to donate 10% of the sale of their artwork toward the fundraising effort, which was designated to help Episcopal Relief & Development’s partner in Haiti.  The Episcopal Diocese of Haiti is the largest diocese in the Episcopal Church, and its vibrant social and educational ministries expanded after the earthquake in 2010 to provide relief and long-term recovery assistance to those hardest hit.

All in all, Reverend Erin told me, the Harvest of the Arts raised $943 for Haiti – “a big amount for a small parish!”  But beyond the immediate benefit of supporting the ongoing disaster recovery work of the Church in Haiti, the event also brought together the ecumenical faith community in Shrewsbury, and strengthened the link between Episcopalians in the United States and our brothers and sisters in Haiti.

As we remember the third anniversary of the 2010 earthquake, let us be ever mindful of the power of the Church to bring people together to heal our hurting world.