Home | Stories | A New Creation Rises in the Philippines

A New Creation Rises in the Philippines

“God will wipe away our tears. Death and suffering will be no more.”

At 10 am, the newest neighborhood in the Philippines was already steaming hot. Six bishops in colorful vestments filed out of a concrete house, and gathered at the back of a covered, but otherwise open, pavilion to begin a celebration Eucharist.

I was there in June, along with the bevy of bishops who traveled to celebrate the Eucharist with the people of Sabang-Bao, and to bless every home in the program.

Bishop Jon Casimina of the Diocese of Davao in the Southern Philippines gave the homily. He talked about how Jesus had given his followers a new commandment, to love one another as he loved them. He said that would be their new identity, and it would be how they would be known. 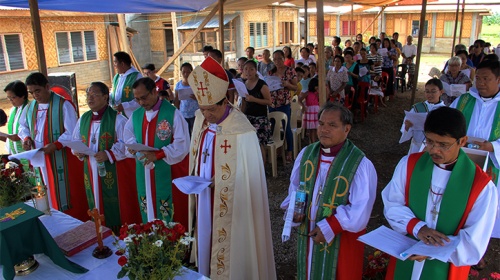 The Sabang-Bao housing development, built on a rice paddy and almost three years in the making, is now home to 80 families who have worked, saved and paid for their new community. Each new structure has clean water, electricity and a small yard.

The new stone and wood houses surrounded the pavilion as parents, children, cousins, neighbors and a few animals filled the space to pray, sing and give thanks.

Sabang-Bao sits a few miles south of Ormoc City, in the Visayas (middle) Islands where three years ago Typhoon Haiyan, one of the most powerful storms ever to hit the Philippines, roared through, killing thousands of people and destroying homes, businesses and neighborhoods. After the storm, some areas were unrecognizable. Many people lost everything. 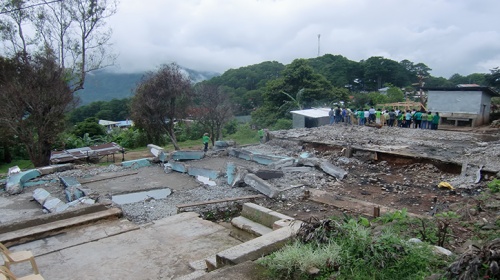 The Episcopal Church in the Philippines, supported by Episcopal Relief & Development, responded with disaster assistance immediately, and then began working with a group of families to plan, construct and finance this new community, where the homes would be stronger, more permanent and resistant to the effects of future storms. 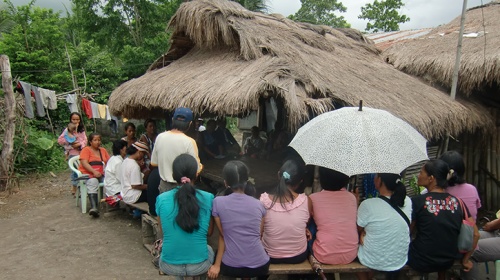 The Episcopal Church in the Philippines decided a few years ago that every program they administer through the church’s E-CARE Foundation would have a “receivers to givers” component. Groups that apply for a program agree to grant back a portion of what they receive so that other groups may receive assistance in the future.

In the Sabang-Bao project, for example, families agreed to help with the construction of their houses and to contribute 30,000 pesos toward the cost of construction. The houses were expected to cost about 150,000 pesos, or about 3100 US dollars. For families who have never owned a home or land, this program provided a chance to have both, and participants were eager to be a part of it. 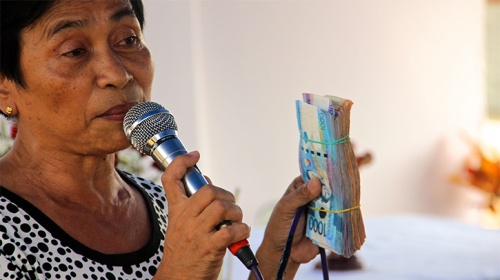 The families did extra work for other farmers in order to raise the money.

Earlier this year, families contributed to a fund that would build a road into the community, which sits a few hundred yards off the main road, through a rice paddy. The families have already chipped in enough to build the road and are now in the process of getting it finished and paved. 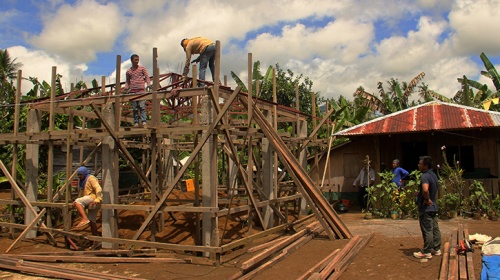 To understand how important this kind of project is to the people who live in it, it’s important to know the standard they have known, sometimes for generations.

The families of Sabang-Bao are tenant farmers who live on the land they work. As tenants, they are prevented from building permanent structures because they don’t own the land. Landowners typically allow farmers to construct temporary housing usually pieced together from scrap metal and wood. The makeshift dwellings are no match for hurricane force winds, which simply blow them away.

E-CARE purchased land so that this group of farmers would be able to own it and build permanent houses on it. 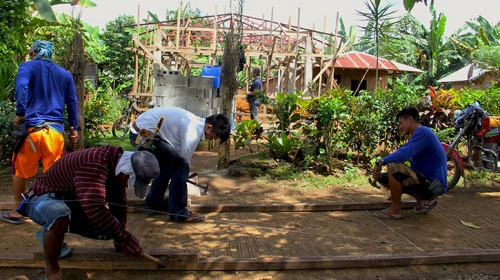 Each house in Sabang-Bao sits on a concrete slab with 10-inch square column supports (also concrete) that are sunk six feet deep. The base of each wall is made of six-inch thick bricks that are manufactured in the community nearby by people who also participate in programs of E-CARE. The walls are made of bamboo sawali, which keeps the interior cool, important in the often stiflingly hot Philippines. Jalousie windows allow for cross ventilation. The roof is made of galvanized iron on steel framing. Electricity and running water are included in each of the 325 square foot homes. Six people can live comfortably in each house. 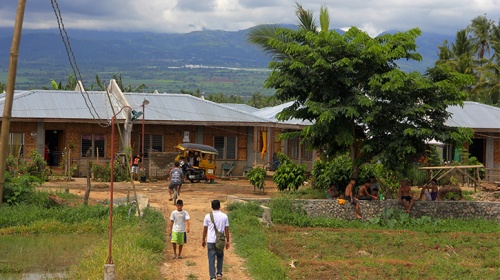 Paul Sapaen is one of two engineers who worked on the project. He lives far away in the north of the Philippines, in the mountains of Luzon, yet he spent 65 days on-site helping to make sure that the houses were constructed according to specifications, and then advising the families on how to maintain their properties. Everyone knows him as “Engineer Paul.” He is a soft-spoken, steady presence. Paul and his partner engineer Lennon make sure that the work is done properly and each family learns to take care of their new home.

“The Church Stuck With Us.” 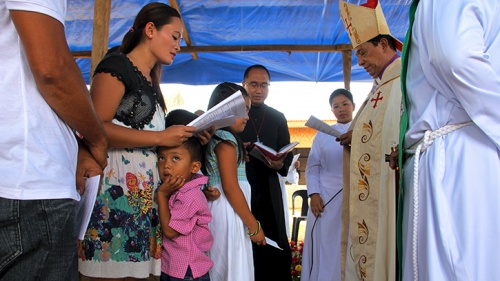 When Typhoon Haiyan (or Yolanda, as it is called in the Philippines) struck, other relief agencies pitched in to help. One built temporary housing for many people. But, like other agencies who rush in in the immediate aftermath of a disaster, most leave fairly soon afterward, to deal with the next disaster somewhere else in the world. The Episcopal Church in the Philippines, however, is a permanent fixture in the development of the country.

A man I met at the dedication said, “The church was the only one who stuck with us, from the very beginning.” 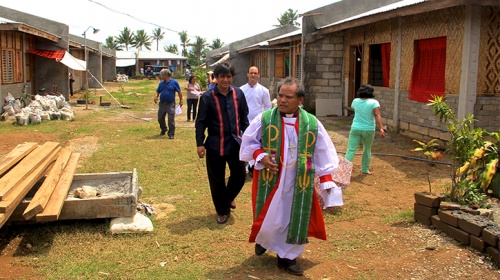 Floyd Lalwet is the director of E-CARE and its programs. I asked him what would have happened to the people who lost their homes, if not for this program.

“Many of them,” he said, “would have remained landless tenants, who would have been allowed to build temporary structures on the land they are cultivating. These dwellings are at the mercy of typhoons. This is the situation that these families inherited and would have passed along to their children and their children’s children.” 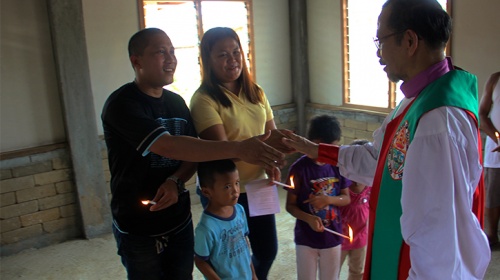 Lalwet and his colleagues at E-CARE are proud of the project but it is important to them for what it means for the future “Of course the fact that we were able to provide permanent residential dwellings to 100 families is a huge accomplishment,” Lalwet said.

“But this project is unique because the people, who are landless tenants and are considered by many people as asset-less, granted back the cost of the land, the cost of the road to the village, and part of the cost of the buildings. Not only do they have a huge financial investment in the project but their grant-backs enabled other communities to likewise acquire lands and strengthen livelihoods.” 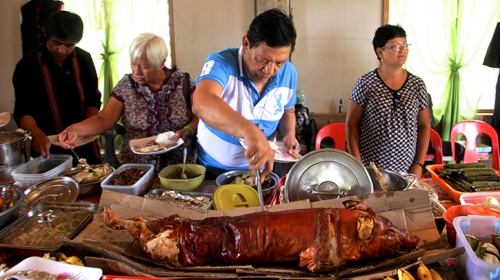 In June, the Sabang-Bao project was nearly complete. A few of the houses were awaiting window installation, and some families were still organizing their living space and learning how to manage their new houses.

But the community was in place. Each family had prepared a feast to celebrate the dedication and the Eucharist. One family was received into the Episcopal Church by Prime Bishop Renato Abibico. The family is Catholic, like the vast majority of Filipinos, but they wanted also to become Episcopalians because of what the church had done to help them create a new future. 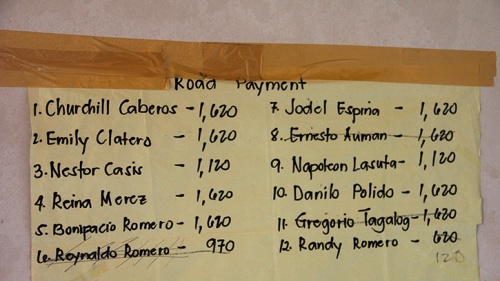 A chalkboard in the community building listed the names of families and the money they had contributed to pay for the road into and out of the new neighborhood.

Each of the visiting bishops went door-to-door greeting families, saying prayers and sprinkling Holy Water around each new house. 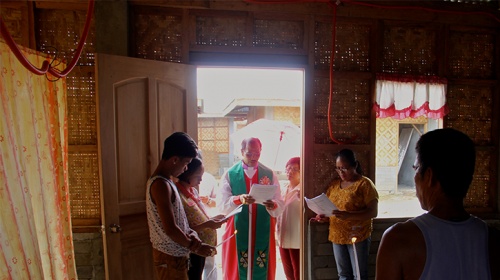 People sang and prayed and celebrated what they had created together, a new community and new hope for the future. The Demelyn and Romel Cabahug family posed for a picture. “We are so very excited about our new house,” Demelyn said.  “It’s the best one we have ever had.” 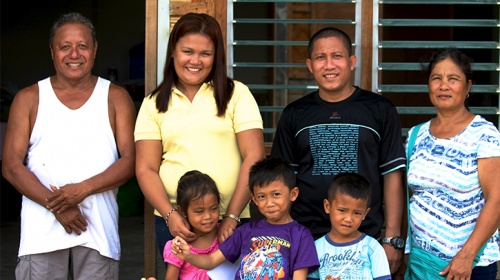 Photos taken by Mike Smith on behalf of Episcopal Relief & Development. Top: Pio and Judith Panubio standing in front of their home during construction; Middle 1: Bishops and the community during Eucharist; Middle 2: Scene after Typhoon Haiyan: Middle 3: Community working and planning together; Middle 4: Woman holding collection during meeting; Middle 5-6:Community members building a brand new homes; Middle 7: Sabang-Bao close to completion; Middle 8: Family being received during Eucharist; Middle 9: A Bishop and Floyd Lalwet walking from house to house for the blessing; Middle 10: Family greets a Bishop during the blessing.; Middle 11: Bishop carves the pig during the celebration.; Middle 12: Road payment taped to the wall for members to track; Bishop blessing a new home and family; Bottom: Family poses during the celebration.