Home | Stories | Caring for our Neighbors, Near and Far

Caring for our Neighbors, Near and Far

In my work as Communications Officer for Episcopal Relief & Development, I get to talk to a lot of wonderful people in congregations across the country about the ways they engage with our mission of healing a hurting world.  This month, I’ve been hearing about Episcopal Relief & Development Sunday, which most churches observe on the first Sunday in Lent, though any Sunday during Lent (or throughout the year!) can be used to remember our organization’s life-giving work.

One story stuck out in particular, and it comes from the Rev. Louisa Parsons, the rector at St. Francis of Assisi Episcopal Church in Ooltewah, Tennessee.  “Reverend Lou” and her husband are the Episcopal Relief & Development Diocesan Coordinators for the Episcopal Diocese of Eastern Tennessee, so they know all about our special Sunday and how to get other parishes involved.  They set up a booth and distributed materials at the diocese’s annual convention in February, and also had their own Episcopal Relief & Development Sunday the same month. Along with preaching a special sermon, Reverend Lou encouraged her parishioners to pick up a copy of the Lenten Meditations booklet and a Hope Chest (our version of a mite box) to collect change for a designated offering later in the season.

The thing about St. Francis, though, is that Ooltewah was right in the path of two tornadoes that hit the Chattanooga area, one in April 2011 and another in March 2012.  After the tornado in 2011, Episcopal Relief & Development began a partnership with Chattanooga-based Metropolitan Ministries, an Episcopal agency that provided emergency assistance to people impacted by the storm.  After the 2012 tornado, assistance from Metropolitan Ministries enabled St. Francis to house a member family for three months until their house was rebuilt.  In both storms, the church acted as a hub of disaster response activity, ministering to parishioners and the wider community.  Because of this, they were asked to be a study parish for an upcoming Episcopal Relief & Development disaster response initiative. 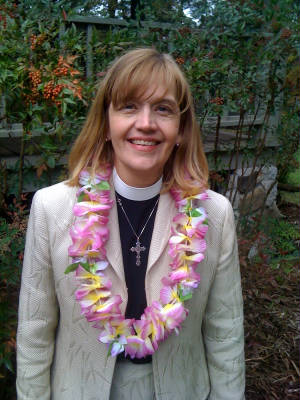 It’s a theme I see developing in our US-based work – congregations who findout about us through our Lenten devotionals or Gifts for Life catalog learn about our disaster preparedness resources and use them to strengthen their ability to respond to community needs.  Congregations who find out about us because we are supporting disaster response in their area learn about our work and want to “pay it forward” by getting involved.  That’s what we’re all about, really –

making connections between communities and helping them to live out the promise in the Baptismal Covenant: to seek and serve Christ in all persons.  Thanks to the folks at St. Francis for caring about their neighbors, both near and far away!

For more information about Episcopal Relief & Development Sunday or to download Lenten resources go to:  www.er-d.org/Lent