Five years after Hurricane Harvey, we celebrate the lasting change that has been created in the lives of over 20,000 survivors in the Texas coastal areas. Episcopal Relief & Development, in partnership with the Episcopal dioceses of West Texas and Texas, has worked to address the physical, mental and financial devastation left by the Category 4, multi-billion dollar storm. Here are snapshot moments from the relief and recovery stages over the years. 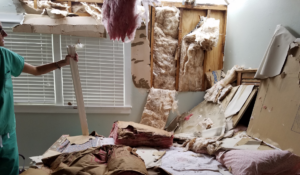 A Home Visit in Port Aransas

Just a few days after the storm passed and residents were allowed back into their homes, Diocese of West Texas Harvey Recovery director and Episcopal Relief & Development Partner in Response and Resilience Jennifer Wickham made a visit to the home of the Rev. James Derkits and his wife. Like many other properties in Port Aransas, their home sustained significant damages. During Jennifer’s visit, she helped the Derkits’ to clean out their bedroom. 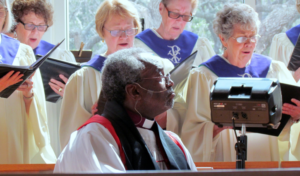 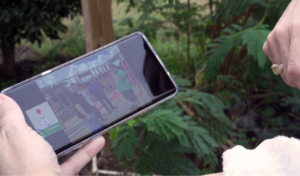 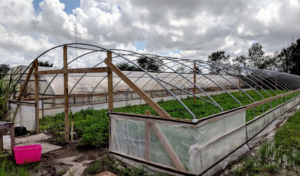 Restoring Homes and the Economy in Little Cambodia

In “Little Cambodia,” an immigrant community in Rosharon, the residents’ primary source of income comes from the sale of water spinach to local Asian markets. After Hurricane Harvey, many of the crops and their homes were destroyed. Families were left without income and a home for over a year. One of the Episcopal Diocese of Texas’ Harvey recovery hubs in nearby Pearland, St. Andrew’s Episcopal Church, helped the community rebuild their economy and homes in partnership with local nonprofits and elected officials. 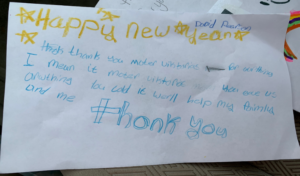 A Thank You Note from a Little One in La Porte

St. John’s Episcopal Church in La Porte served families through its after-school program. The existing relationships they had with the community allowed them to ask questions and check in on Harvey’s recovery in the most vulnerable neighborhoods surrounding the church. The families received emergency rental assistance, gift cards for food and home supplies as well as referrals to other services in the area including the home repair efforts by St. Andrew’s in Pearland. One of the children from a family that was helped wrote a letter of thanks to St. John’s. 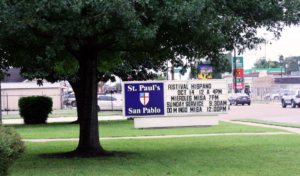 After Harvey, the Rev. Ed Gomez, vicar of St. Paul’s (San Pablo) Episcopal Church noticed an increase in the number of domestic violence cases in his community due to the anxiety and depression brought on by experiencing trauma, the loss of work for many day laborers and the onset of homelessness. San Pablo began a free bilingual mental health counseling program to help families cope in a healthy way. 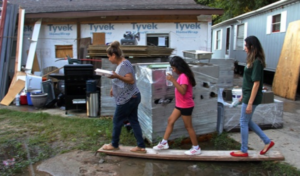 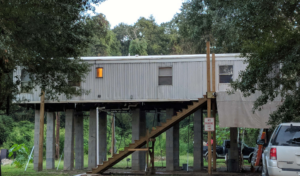 Community Meals and Rebuilding Support in The Woodlands

St. Isidore’s Episcopal Church operates a community dinner truck ministry called Abundant Harvest in an unincorporated immigrant community in The Woodlands, TX. During Hurricane Harvey, a dam was released to protect nearby neighborhoods from flooding. As a result, 14 feet of water flooded the neighborhood and the residents had few resources available to them to rebuild their homes safely and securely. Episcopal Relief & Development partnered with the Diocese of Texas to distribute gift cards to the families. Cards were distributed over time, and the Abundant Harvest ministry checked in with the families regularly to keep track of progress as well as when more financial assistance would be necessary. 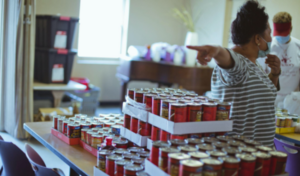 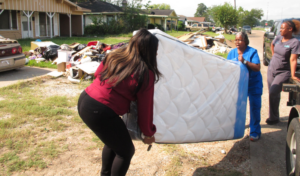 Tapping into Existing Relationships to Respond to Other Disasters

Long-term recovery was intertwined with responses to the February 2021 winter storm, a handful of tropical storms, the March 2022 tornadoes and the COVID-19 pandemic. The Diocese of Texas developed great relationships with community agencies as a part of Hurricane Harvey’s recovery and so was able to respond quickly to needs. They provided mattresses in Beaumont during Tropical Storm Imelda and food in Port Arthur during Hurricane Laura.

Learn more about our Harvey work: