Home | Stories | How Can We Sustain The Gains In The Fight Against Malaria?

How Can We Sustain The Gains In The Fight Against Malaria?

I have experienced difficult days in this community trying to console mothers who lost their babies and husbands who lost their wives. We thought our ancestors were punishing us until we learned that mosquitoes and malaria were the cause of our predicament. I am glad the community is aware of the causes and preventive methods. Most pregnant women now deliver healthy babies and children sleep well at night. – Chief Ayinga, village leader, Padaguur, Ghana

This is what I typically hear from partners about NetsforLife®, Episcopal Relief & Development’s comprehensive malaria prevention program. They express overwhelming gratitude for the change they are witnessing in their communities.

Malaria is a preventable and treatable mosquito-borne disease and one of the leading causes of morbidity and mortality worldwide. Globally, it is estimated that about 3.3 billion people are at risk of malaria every year. The international community has mobilized to tackle malaria, and collectively we have seen significant gains. Between 2000 and 2010, malaria mortality rates fell by 26% around the world. In Africa, the decrease was 33%. During this period, it is estimated that 1.1 million malaria deaths were averted globally as a result of the recent scale-up of interventions.

Chief Ayinga’s reflection expresses the impact of the hard work being done in communities around sub-Saharan Africa. We should all rejoice in this progress but we cannot rest on our laurels. As we approach the final lap on the current set of Millennium Development Goals (MDGs) the fight against malaria is at a critical juncture. Will we sustain the gains or will we fall back?

In order to continue to combat malaria globally, the World Health Organization and Roll Back Malaria have recommended a number of strategies, including the ongoing use and distribution of Long-Lasting Insecticide-Treated Nets (LLITN) supported with Indoor Residual Spraying. We have learned that net distribution is not enough. We need to promote awareness and support a cultural shift in communities so that people have the information and tools to prevent infection. We also need to go the extra mile ­- in fact, go to the last mile, to reach those in the remote areas who are often the most vulnerable to malaria and other diseases. The most effective programs in malaria prevention motivate communities and families, equip them with knowledge and LLITNs and instill a ‘net culture’ through continuous support and monitoring and through various social behavior change strategies. This is at the core of NetsforLife®, our award-winning model.

The strength of NetsforLife® is a commitment to work with and through communities at the grassroots level. Local health volunteers go from house to house, hanging nets over sleeping areas. Their neighbors trust them in their homes, which makes it easier to follow up to ensure they’re being used properly. These community health volunteers, also known as Malaria Control Agents (MCAs), track the use of LLITNs at the household level for at least 18 months. This is supported by other activities such as the use of theatre, radio talk shows and durbars or ceremonial gatherings, which further strengthens the cultural practice. 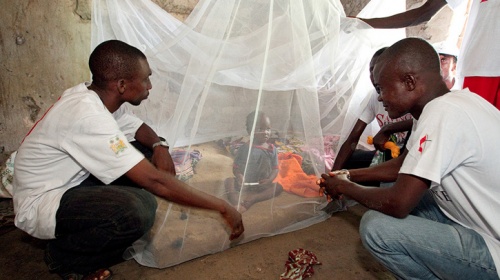 In many places, the MCAs engage in broader health monitoring and advocacy, like encouraging pregnant women to seek out antenatal care, helping to protect them and their unborn children from the disease. Mumile, from Wakuan, a remote village in North Eastern Ghana, was visited by an MCA early in her pregnancy. Along with information about the use of nets, they encouraged her to include Intermittent Preventive Treatment in pregnancy (IPTp) as part of her regular check-ups. In the past, Mumile visited the hospital frequently with bouts of malaria. The disease took a heavy toll on her health and finances. Since receiving a mosquito net from NetsforLife® a year ago and with the inclusion of IPTp, she has remained malaria-free.

Data shows that if a program can successfully carry out this kind of mobilization, education and distribution, net possession can surge from an average baseline of under 9% to over 68%. More importantly, net usage (sleeping under LLITNs consistently and correctly) by household also rises, reaching on average nearly 75% of households. In some countries we’ve seen even more extraordinary results of over 90%. It is this kind of consistent and correct use of nets that has led to the decrease in death rates across Africa. However, these gains are fragile, as nets begin to wear out and no replacement strategy is in place. We must not allow ourselves to fall back.

As the world focuses on reaching the finish line on the current set of MDGs and setting new, post-2015 development goals, malaria must continue to be a key priority. Following a community based approach and the ‘leave no one behind’ edict we must recommit ourselves to creating a world where people live healthy happy and productive lives – with no fear of deadly diseases like malaria. It’s an achievable goal, and if we work together, we can sustain our hard earned gains.

This post is part of a series produced by The Huffington Post and the NGO alliance InterAction around the United Nations General Assembly’s 68th session and its general debate on the Millennium Development Goals (MDGs), “Post-2015 Development Agenda: Setting the Stage” (September 24-October 2, 2013). The session will feature world leaders discussing progress made on the MDGs and what should replace them when they expire in 2015. To read all the posts in the series, click here; to follow the conversation on Twitter, find the hashtag #No1Behind. For more information about InterAction, click here.