Home | Stories | Jeanie and Phil: A Wellspring of Inspiration

Jeanie and Phil: A Wellspring of Inspiration 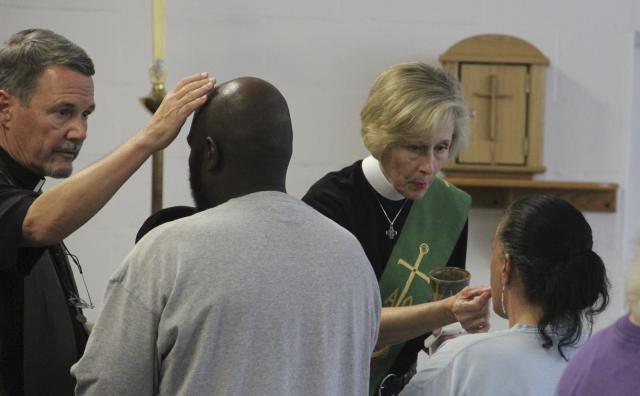 Jeanie Beyer moves toward the center of the gathering. “The Lord be with you,” she says. And the church answers back, with enthusiasm, more like a tent revival than a sedate Eucharist.

This is Grace Mission in Tallahassee, Florida where Jeanie and her husband Phil spend every Tuesday and chunks of other days of the week, serving the community of homeless, addicted and recovering men and women.

The Beyers are devoted to this urban ministry where those they serve can get a shower, select items of clothing, eat a healthy meal or send their children for after-school tutoring. The Beyers are also regular donors to Episcopal Relief & Development.

Jeanie is archdeacon of the Diocese of Florida, which means she is the head deacon, directly serving where the bishop sends her. Six years ago that was to Grace Mission, which is led by Vicar, Amanda Nickles. Jeanie says this kind of ministry is central to the charge she was given at her ordination:  “….In the name of Jesus Christ, you are to serve all people, particularly the poor, the weak, the sick and the lonely.”

She was immediately drawn to the kind of work that Grace does each day.

“It’s an amazing place,” she said. “We love every minute of it. And Phil has gone everywhere I’ve gone and jumped right in. Guys seek his counsel and he kind of becomes their friend. They love that.”

Phil often takes people to lunch or to a baseball or basketball game at nearby Florida State University. He listens. Since he’s not formally a part of the staff, he has a little distance and people trust him. He’s a listener and he clearly cares about the people at Grace Mission.

At a Tuesday healing service, those who choose to come forward are literally surrounded by Jeanie, Phil and their fellow worship leaders who lay hands on heads and shoulders and pray over them.

Grace relies on the support of other churches and individual donors, and there is never enough money or time or staff to serve all who need assistance. But Jeanie and Phil are tireless in their efforts. They’ve been at this for six years in Tallahassee.

Outreach has always been a priority for the Beyers, whether they are doing the work themselves on the front lines or supporting others who do.

“We love the Episcopal Church, and the vision of Episcopal Relief & Development is appropriate. We buy into it,” Phil said. “God’s been very generous to us. Whatever we can give in return, we will give.”