For the season of Lent this year, we reached out to people in our partner organizations and asked them about their Lenten practice. What follows are answers to those questions from Jeanne Francoise Ndimubakunzi, a Gender-Based Violence Prevention Coordinator for the Anglican Church of Burundi.

What are you giving up or taking on during Lent?

As a tradition in my family, since my childhood, every Lent we reduce the amount of food we prepare and eat so that we keep a certain amount of money to support those in need. We gather clothes and shoes that we no longer use and take them to church as a donation. We also spend at least one or two hours per week visiting hospitals or homes for prayers and support to the sick.

What is your favorite scripture to meditate on during Lent?

The most meaningful scripture passage for me is Isaiah 53:1-12, especially where it says:

“… he had no form or majesty that we should look at him, nothing in his appearance that we should desire him. He was despised and rejected by others; a man of suffering and acquainted with infirmity; and as one from whom others hide their faces he was despised, and we held him of no account.Surely he has borne our infirmities and carried our diseases;” (NRSV)

This passage speaks to me during this time when my mind is focused on Gender-Based Violence in Burundi and other countries. My greatest concern is about the critical need to rebuild broken relationships and restore the destroyed lives of victims. Not many people are willing to care for survivors of sexual violence.

Jesus emptied himself to save mankind from perishing, but not many believe and like to follow his example of giving up for someone else’s life. Many people have a hard time changing their position or making a slight change in their behavior, accepting a little embarrassment for the sake of saving lives of victims of GBV. Yet, our Savior left his beauty and majesty. 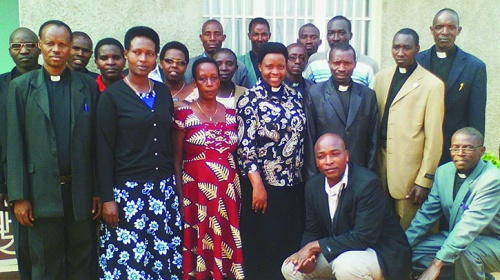 This prophecy embraces the situation of survivors of sexual abuse, accused of being responsible of what happened to them, segregated in the community and considered an outcast.

“Out of his anguish he shall see light; he shall find satisfaction through his knowledge. The righteous one,my servant, shall make many righteous, and he shall bear their iniquities”

We are all alike, justified by the blood that Jesus shed on the cross. He does not judge, he justifies because he gave his life for our sake, and with his example, we are all called upon during Lent to think twice before judging others and causing pain and sorrow to others – especially those affected by violence.

Let us all remember that Victim + Support = Survival.

Together, let’s do something to rebuild destroyed lives, to bring hope to the hopeless and to let others see the light of Jesus shining in us and come to him, the source of all goodness. Give material assistance and take time to attentively listen to the stories of those who have been kept quiet, and show the way to those who do not know where to go to for assistance and pray for them this Lenten season.

What I want to share is a sentence I got during a training on Gender-Based Violence and Peace Building: if you spent a whole day peacefully in your community but you have not even once got someone who tells you “thank you,” know that you have missed a point somewhere.

Do something that makes someone else smile at least for a second. Jesus took our sadness and our shame and pain in his body so that we would become free from them.