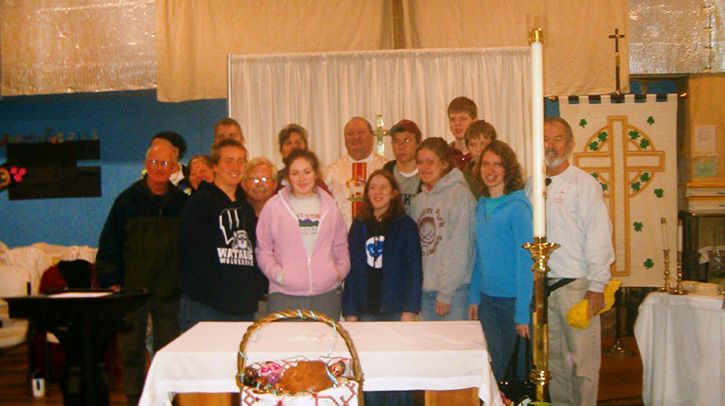 Ten years ago Hurricane Katrina struck the Gulf Coast, leaving over 1,800 dead and tens of thousands displaced. This month through the #KATRINA10 Blog Series we shared stories to commemorate the anniversary of the event and celebrate the progress made to rebuild communities.

We have been asking for story submissions during our 75th Anniversary. In this story Bob Goddard, a member of St. Luke’s Episcopal Church in Boone, NC, recounts their own efforts during the recovery. We salute Bob and his team and all those who shared similar stories on social media. It takes all hands to heal a hurting world!  #AllHands75

Our team’s (St. Luke’s Episcopal Church, Boone, NC) first visit was in December 2005. Even then, the focus was on demolition – gutting homes of everything amid the stench, mold, and decay from four months of neglect. Cars in trees, boats on Highway 90, personal effects everywhere, people with no homes, no food, no clothes…no hope. But we worked to do whatever we could. One of the highlights was singing Christmas carols in a nursing home with local church members who had lost almost everything themselves, but carried on, giving the gift of song to others.

The next two years (2006, 2007) saw more rebuilding. Existing homes were refurbished, and new homes were built on stilts, all by volunteer labor from across the country. Hard, hard work. Up in the morning, eat breakfast, then on to the job site(s). Break at noon and back to Camp Coast Care (Long Beach, MS) for lunch, then back to the job site for more work. Back to C.C.C. for dinner and socializing with others from across the country. Cooperative endeavor with volunteers from all over the USA. Friendships were formed, skills learned, and homes were built.

One of the highlights for me was in 2008, when our team finished up three homes and the new residents got to see them completed. Each of the three families were single-parent families – and all the parents were men! How coincidental was that! The tears flowed from every eye as these families entered their new homes for the first time – all were house-blessed by clergy.

Black, white, old, young…it mattered not. These people had suffered unspeakable hardships for 2-3-4 years. What did matter was that people from all over this great country came together as one to help. My fervent wish is that the partisan divisions – be they rich / poor, black / white, North / South, gay / straight, conservative / liberal, Muslim / Christian / Jew / atheist – can somehow be healed and we can move forward in peace and love for one another.

Take a closer look into Bob’s experience by flipping through his slideshow!