In the Florida Keys, Episcopal Church partners in the Diocese of Southeast Florida are working every day to help their communities recover after Hurricane Irma slammed into their island homes last September 9.

As a member of Episcopal Relief & Development’s staff, I traveled to Florida in October to visit with some of our church partners responding to needs in the aftermath of the hurricanes.

I spent a few days following the work of one priest and her congregation, the Reverend Debra Maconaughey, rector of St. Columba Episcopal Church in Marathon, Florida. Maconaughey’s church is relatively small—average Sunday attendance about 82 and split among young and old, seasonal and year-round residents. Some are working people who struggle to keep a roof over their heads. And, the church is deeply involved in its community. It runs a homeless shelter, an after-school program, a soup kitchen, an annual Celtic Festival, an art gallery and a rug-hooking group that calls itself “the Hookers.”

Shortly after Irma hit, the Red Cross asked if the church could provide food service—three meals a day—cold breakfast, hot lunch and dinner–for two and a half weeks. Not a problem. 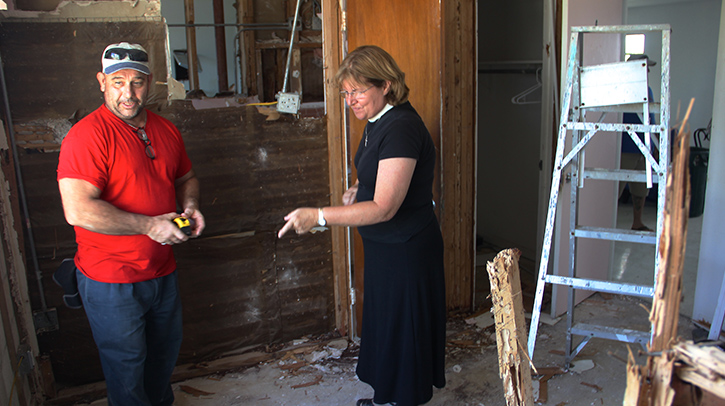 After the building housing the church’s homeless shelter was rendered unusable because of damage from the storm, Maconaughey, known as Pastor Debra around Marathon, enlisted electricians and builders who volunteered to repair the facility. It re-opened for lunch at the end of October and was fully functional by November. The parish hall and breezeway that connect the church buildings became a de facto distribution centers for diapers, bedding, bug spray, canned goods, furniture and other donated items.

“If we closed our doors, people would miss us,” Maconaughey said.

Immediately after Irma hit, Maconaughey opened her church campus to the newly homeless. Nineteen people sheltered there immediately after the storm. That number soon grew to 28. Maconaughey helped procure six trailers to use as temporary residences. She parked them on church property and they are still in use. Some people lived in the building that houses the church after-school program. Some had lived on their boats, boats that ended up at the bottom of the town harbor or damaged beyond repair by the storm surge.

Those who initially lived on the church property have now found permanent housing and the church has taken in more people who need a temporary place to live. There are now nine trailers on church grounds. 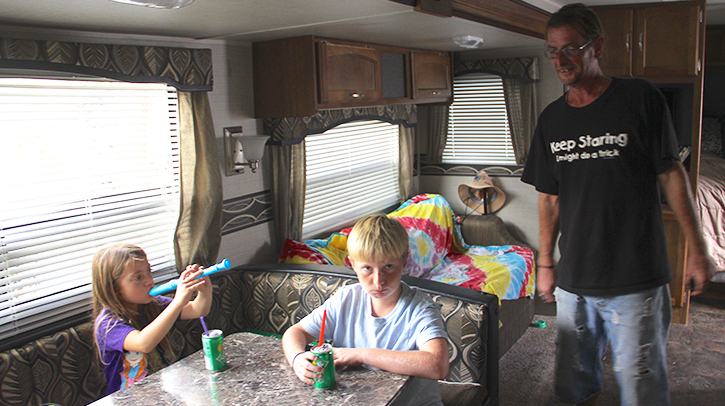 Rick Kidwell and his two children, six and nine, lost their boathouse in the storm and now live in a church-provided trailer in the parking lot. Throughout the immediate aftermath of the storm, Rick worked to help others clean up their property and repair their homes. “It keeps me busy,” Rick said at the time. “It feels good to help somebody else.”

Now he’s helping by serving as full-time disaster coordinator for the church. He continues to live on-site and his position is supported by financial assistance, including donations from Episcopal Relief & Development.

Maconaughey worked with Federal Emergency Management Agency (FEMA) representatives in the first days after Irma hit. FEMA promised 80 trailers for displaced residents. Maconaughey said they needed thousands. To be eligible for a FEMA trailer, people must prove ownership of their homes. 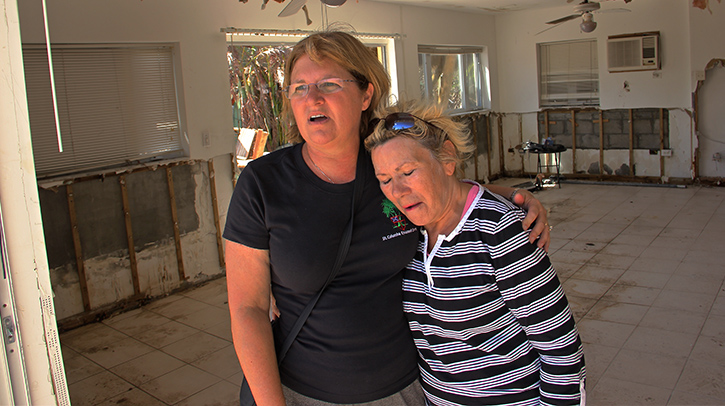 People who earn a lower income working in the fishing and tourist industries rent their houses, for the most part. Since so many of those houses were destroyed, many renters were left with nowhere to live. And if they are lucky enough to have a landlord who plans to rebuild their home they aren’t able to afford the higher rent that comes with new construction.

Many of the homes of St. Columba’s own parishioners suffered heavy damage, including Win and Kristin Reed’s family. Kristin is the church treasurer. Their six-year-old, Jacob, participates in the church’s after-school program and daughter Kayleigh, 14, is one of the singers in the church band that performs each Sunday. They have been living in a trailer in their front yard since the storm. And it looks like they may be waiting for a long time. Contractors can’t work fast enough to repair all the damage in town, and of course, the work is costly.

Win told me that Maconaughey‘s house in Ramrod Key was also damaged “but she’s helping everyone else,” he said. “This lady is a saint. Without the church, we’d be in a tent.” 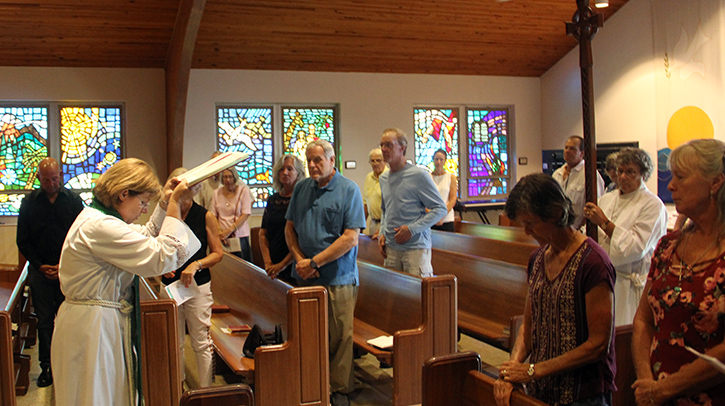 On the Sunday I was there, emotions were still raw and people were tired. But they came together at church to support each other… “It’s been five weeks since the storm,” Maconaughey said, “but it feels like one long day.”

Maconaughey‘s sermon was an occasion to help people keep things in perspective and draw strength for the trials of the week to come. She acknowledged that people feel depressed and worried when dealing with hurricane damage at home. And it can seem even worse because of the other hurricane (Harvey) that hit Houston and the fires in California and the many other disasters that affected so many people last fall.

“Pray that we be continually given to good works because that‘s what we signed up for,” Maconaughey said. “We come together around the Eucharistic table and celebrate and when we go out into the world, we are the hands and feet of the Lord.”

“Where is Jesus in all that?” she asked. “God is in the rebuilding of the community and inviting everyone to be part of it.” 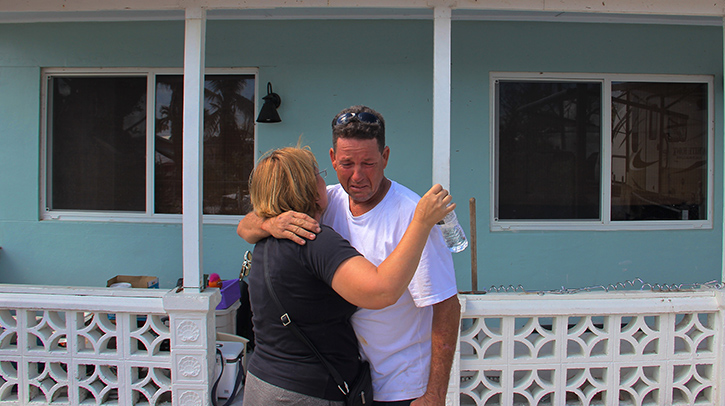 Rebuilding the community seems to be the fuel that keeps Maconaughey and St. Columba going. They managed a successful Celtic Festival last fall when other community activities were cancelled because of the damage. They convinced the electric company to hang banners around town. They cut ticket prices by half.

Maconaughey said, “You can’t just sit around and look at debris all the time.”

People came to the festival and were grateful. Maconaughey said that many people told her, ‘We really needed this.’ And the festival made money, too. Proceeds support the church’s after-school program.

Gonzales called Maconaughey “a force to be reckoned with.”

“She doesn’t sleep much,” said Gonzales of Maconaughey. “She dreams a lot.”

So on Monday morning, when some priests take the day off, Maconaughey drove to a meeting with other faith leaders and Marathon city officers. They meet regularly to try and help people get housing, to keep them in the community. Some businesses already reduced hours or shut down because they don’t have enough workers. People were leaving in search of work elsewhere. 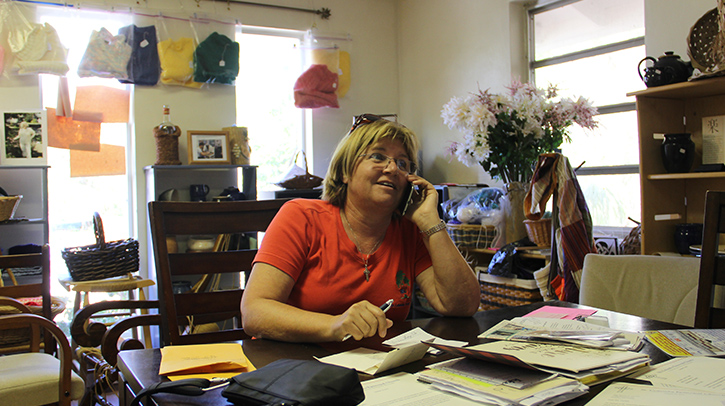 In recent months, Maconaughey has turned her attention to finding more permanent housing solutions. At the meeting of church leaders, she talked about a piece of property for sale in the city—affordable and large enough for about twenty housing units. The group was familiar with the parcel. She laid out the costs, the down payment, the mortgage and how much each unit could be rented for. She proposed that the churches get together and buy it, and build affordable permanent housing.

“If we can’t get people a place to live, they’ll just disappear,” she said.

Maybe the consortium of churches will get its property and the housing units will become a reality. They plan to make an offer this week. 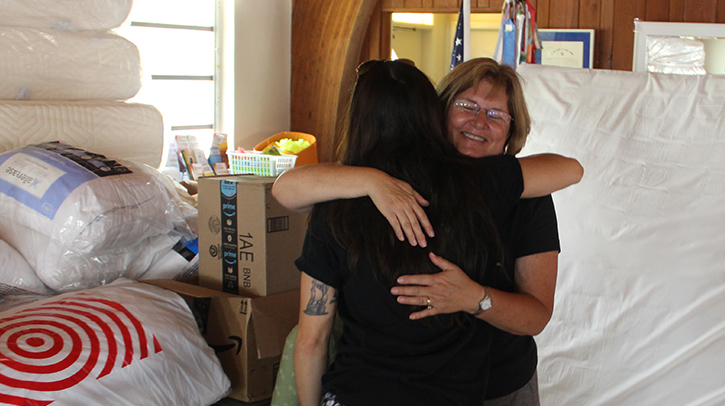 All across the dioceses of Southeast Florida and Central Florida, church partners are helping in ways large and small. In the aftermath of Hurricane Maria, which devastated Puerto Rico, thousands have left the island for the Orlando area. The Episcopal Diocese of Central Florida is assisting those displaced by providing temporary housing and food. Individual case management is also being planned.

Here are just some of the ways Episcopal Relief & Development church partners have helped:

Clean up: Building materials and supplies such as wallboard, box-cutters, shovels, masks, hammers and other tools that make it possible to clean up and rebuild are being provided

Emergency Supplies: Food, bedding, clothing, water, cleaning materials are just some of the items that have been distributed  to thousands of people

Housing: Trailers have been purchased and rented for people who lost their homes and have nowhere to go.

Cash assistance: Gift cards allow people to have control over getting what they specifically need, from baby formulas to helping purchase basic furniture or buying food.

Resettlement: A diocesan-operated shelter in Central Florida is providing support to displaced people from Puerto Rico such as providing clothing, food and other basics so that they can get started in a new place.

Mitigating business interruptions: The storms damaged many businesses, some of which shut down entirely. This left many people unemployed. Many of them lived paycheck-to-paycheck. They need items such as gas to travel to job interviews.

Food: Supplying a healthy meal  for  those who have lost their homes, jobs or cars

For years, our US Disaster team has provided training and workshops with Episcopal Relief & Development’s church partners across the country on how to prepare for and respond to disasters such as hurricanes. That training, investment and ongoing education prepared many churches and dioceses to respond in highly effective ways to the many needs that people have in the wake of these storms.

A networked communication system, for example, was already in place to help church groups and volunteers talk to each other about what they could do to help. Some churches have the ability to temporarily house people. Others have kitchens and the capacity to serve meals to many people. Some could offer trained pastoral care teams, or provide transportation. This coordinated approach, carefully constructed and maintained over years helped make the response more effective and efficient. The result: many more people were reached and helped.

One thing we know about disaster relief and recovery is that it takes a very long time, years in many cases, for communities to recover. Because of your support, Episcopal Relief & Development is here, and will be here, for as long as it takes. Thank you.

Top: “Worshippers in pews”  Worshippers in the pews at St. Columba include Rick Kidwell, at left in the front pew with his daughter in his lap. Dennis Flowers is wearing the bright orange “I survived Irma” tee shirt. Both men had lived on boats, and lost them in the storm. They were living, temporarily, on church property. Kidwell is now the “disaster coordinator” for the church, a position made possible, in part, through a grant from Episcopal Relief & Development.

Middle 1: “Renovating Shelter” Volunteers worked with Pastor Debra on how to repair the homeless shelter. The building sustained extensive damage during the hurricane.

Middle 2: “St. Columba lot with trailers”  Several families are living in the trailers like the one pictured here of Rick Kidwell and his family. The trailers were procured by the church.

Middle 3: “Pastor Debra comforts Shirley”  The Reverend Debra Andrew McConaughey (“Pastor Debra”), rector of St. Columba Episcopal Church in Marathon, FL, comforts Shirley McAllister who lost most of her possessions and most of her home in Marathon, FL when Hurricane Irma struck in September. She and her husband are living in a trailer on their property now and have begun the long process of removing drywall and preparing to rebuild.

Middle 5: “Win hugs Pastor Deb”  Win Reed is a member of St. Columba. His house was severely damaged in the storm and he is living in his front yard with his wife and two children in a trailer provided by the church. The house is still not repaired as contractors cannot keep up with all the demand for repairs, and people can only afford to do so much at a given time.

Middle 6: “Meeting with city” Pastor Debra meets regularly with city officials and other faith leaders in the Marathon community to plan how to help people navigate federal and insurance regulations, how to rebuild or find new housing, etc.

Consider donating to the US Disaster Response Fund