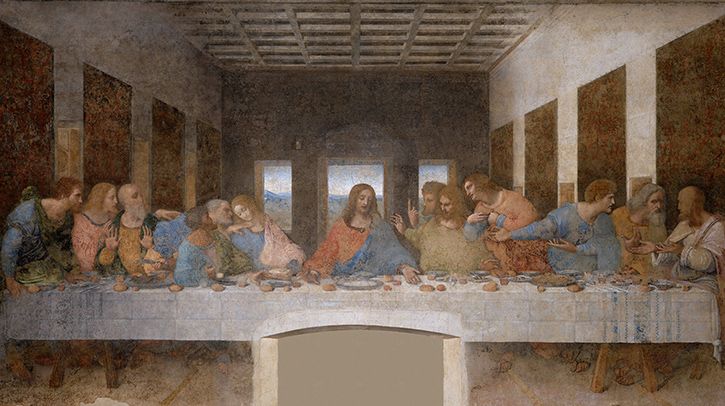 The Last Supper: The first image that comes to mind is that of the great and majestic fresco of Leonardo da Vinci, in the refectory of the Monastery of Santa Maria delle Grazie.  Some critics of its latest restoration claim it now unrecognizable, but I see no danger of it ever fading from the West’s common cultural memory. Countless reproductions of The Last Supper, good and bad, have sealed its image into the minds of countless people. The fresco’s hold is so strong that even as I write I can see the long rectangles of the table and windows and the flowing reds and blues of the apostles’ robes. I can picture the soon-to-be-betrayed innocence in the eyes of Christ, the shocked look of those who have learned that one among them is a traitor, the unbelieving and uncomprehending pointing and self-accusation of Peter and the damning icons of the split salt and the clutched moneybag of Judas Iscariot.

No matter that this is extreme artistic license: there was no such table, no such scenic views, no such opulence in blues and reds. The image of da Vinci’s Last Supper is so powerful, so commanding, that it threatens to block other images, other ideas of this holy meal on the night in which our Lord Jesus Christ was betrayed. And perhaps the most dangerous aspect of its power, its dominating image is that for all its artistic vividness, da Vinci’s Last Supper is temporally static and motionless. It captures a moment in time. It is Maundy Thursday preserved in aspic.

That same danger is present when we are tempted to ignore Christ’s continuing commands that give Maundy Thursday its name, the Mandatum of how we disciples are to live with one other: “A new commandment I give to you, that you love one another; even as I have loved you.”

During the next holy days, consider that. And remember what Christ told his disciples on the night before the storm began: He commanded them to love and serve one another. That was no static, isolated moment in history. That was no fresco painting, beautiful but remote and removed from our lives. That was the living commandment and sacrament that we celebrate, and to which we re-commit, today.

The Rev. Canon Michael Barlowe is the Executive Officer of the General Convention of the Episcopal Church.

Image: The Last Supper, a painting by Leonardo da Vinci