In this story, you will meet Domingos and Rosa, a couple with five children living in Quimussungo, Angola. Discover how the Maza yi Moyo (Water Is Life) program has strengthened their community through a method called Community-Led Total Sanitation. The Community-Led Total Sanitation process is a tool introduced to communities to encourage latrine construction and use. This multi-step method involves community mapping, a transect walk to see areas of open defecation, discovery of disease transmission and a planning phase during which program participants make a commitment to build latrines and become activists for this new healthy lifestyle.

When the Maza yi Moyo (“Water is Life”) program came to Quimussungo, a rural community in northwestern Angola, Domingos was one of the first people to volunteer for the local Water & Sanitation Committee (WSC). As one of the enthusiastic early participants in the Community-Led Total Sanitation process, he came to recognize how his household’s practice of open defecation negatively impacted the health of his community, and he set out to build a sturdy, sanitary mud-brick latrine near his home.

Domingos’ wife, Rosa, says: “He did not rest until our own latrine was ready.” 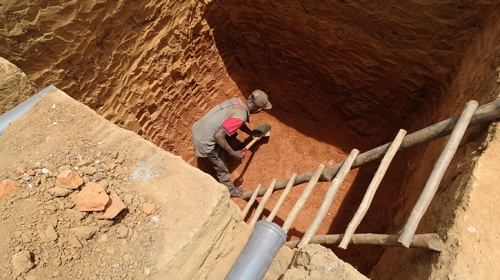 Domingos and Rosa have five children, and big families are common in Quimussungo. Keeping children safe and healthy is the top priority for any parent, and the lack of adequate sanitation was a huge challenge in this community – in rural Angola, diarrheal disease accounts for 15% of child deaths under age five. “Sometimes my children were afraid to ease themselves because they were afraid of going into the bush,” said one mother. “We learned that going to the bush was what was making us sick,” said a child. 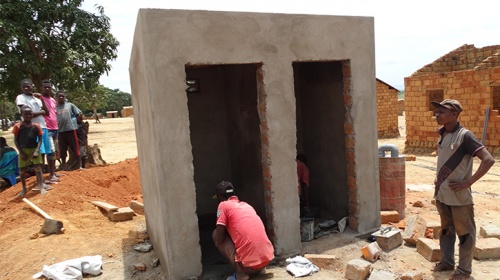 Maza yi Moyo is a program of the Anglican Diocese of Angola, supported by Episcopal Relief & Development and USAID. The program team works with traditional leaders and local authorities to recruit individuals for community-level WSCs, who guide their communities to improve structures and behaviors for water, sanitation and hygiene. At least 50% of the committee members are women, which is key since women often bear primary responsibility for collecting water and managing the health of their families. 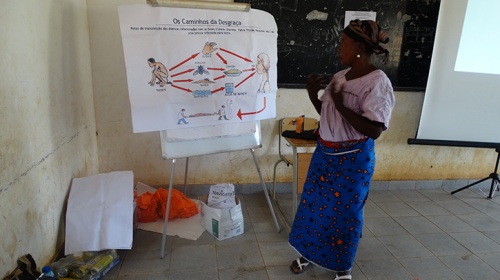 During the first year of the program, 20 communities joined Maza yi Moyo. According to the local committees, nearly 60% of households were practicing open defecation at the start of the project, but with the continuing work of the WSCs to raise awareness about sanitation and help their neighbors make healthy decisions about hygiene, 233 families like Domingos and Rosa’s decided to construct household latrines. 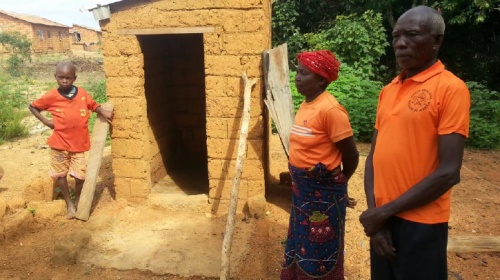 When Domingos got the idea to build their latrine, Rosa encouraged him to complete it and is overjoyed with the result. “I never liked going to the bush but had to live with it because that was the only means available,” she said. “Normally when you go to the bush, you see feces from other people, and that spoils your appetite for food. Now that the latrine has been constructed, I can keep the dignity that I want.”

Faith is the Communications Officer at Episcopal Relief & Development.

Idris Buabeng is a Program Officer for International Programs at Episcopal Relief & Development.

Image Captions: Top, Joy and Augusto standing in front of their family latrine in Quimussungo, Angola (photo by Idris Buabeng); Middle 1 and 2 show the construction of latrines from digging to brick laying; Middle 3, Workshop on how open defecation causes illness; Middle 4, Domingos and wife Rosa standing by their latrine.