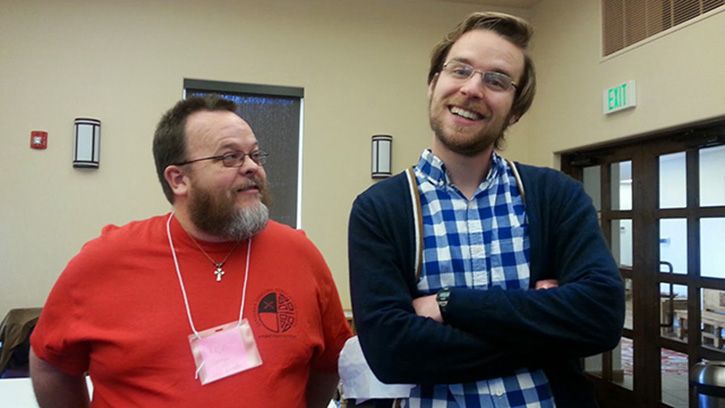 My name is Ethan Lowery and I have a confession.

I am an extrovert.  And a church nerd.

So imagine how exciting it is for me to take folks on an aerial tour of The Episcopal Church across the 50 states, through the Episcopal Asset Map!

To clarify, this is a virtual aerial tour, through an amazing online portal built in partnership between Episcopal Relief & Development and the Office of Justice and Advocacy Ministries of the Domestic and Foreign Missionary Society. Through this searchable map, which features Episcopal churches, schools and other ministry bases, it’s possible to witness how people are doing church and engaging in God’s work in a bevy of different contexts! 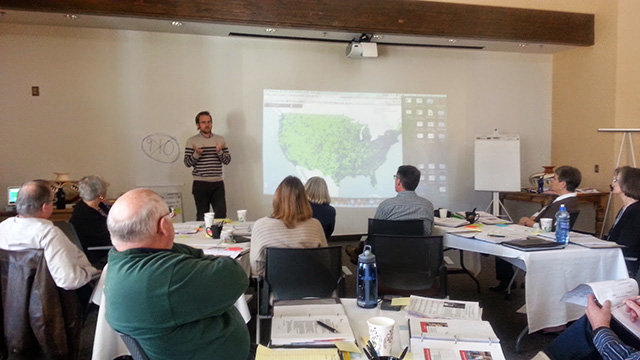 As the west coast organizing intern for the map (basically all dioceses west of the Mississippi River), my role is to invite diocesan leaders to participate and share this resource with folks in their Episcopal Church networks. Anyone who’s done regional organizing in the church knows that most of the ‘activity’ of my work entails emails and phone calls, but this is all in service of engaging church leaders from all over the midwest, southwest, northwest, and west coast and inviting them to share their vision with me of how the Asset Map could serve the specific needs of their communities.

Because the map’s information is largely user-generated (beyond the initial pins, which we sourced from the Red Book, diocesan sites and regional contacts), we need as many hands on this project as we can get! I’ve talked to diocesan disaster coordinators, communications directors, Jubilee officers and a multitude of canons (to the ordinary, for finance, for administration, missioner, you name it) and it feels really remarkable that a tool like the Asset Map could serve so many different ministerial vocations. 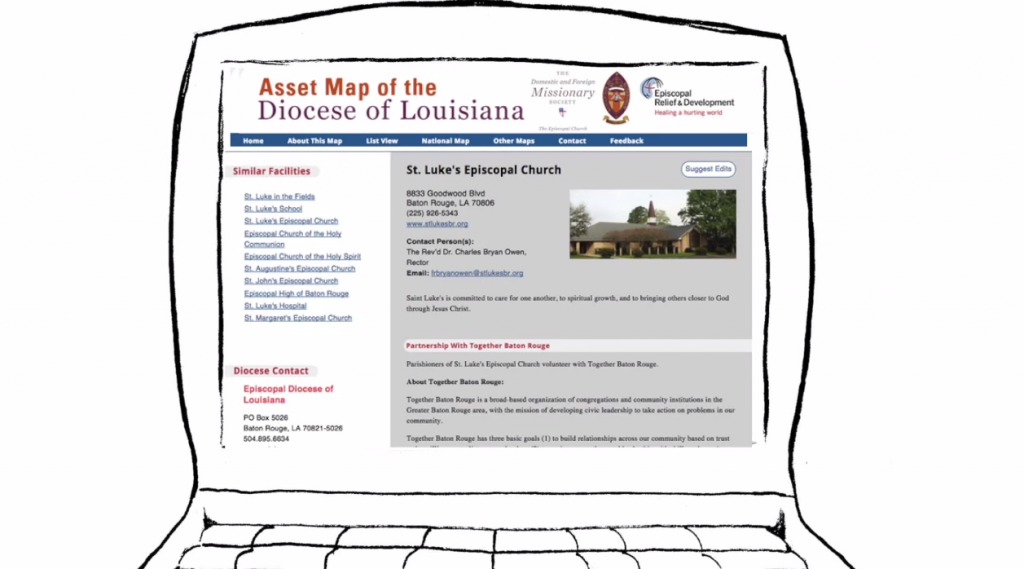 I remember one meeting with the mission and outreach team of the Episcopal Diocese of Virginia, while I was home for Christmas. In visioning how the Asset Map could assist their ministry, an early draft of our national map came up. It turns out that a large portion of their mission work is international, extending beyond the borders of their own diocese. The potential to keyword-search nationally for churches with relationships in South Sudan was so exciting to them – and something I never could have anticipated!

To help better understand the scope and breadth of this project, imagine a scenario that someone in an Episcopal church might find themselves in:

Paul is trying to be more environmentally conscious. Every day it seems he reads something new about climate change. He feels strongly that the church, his church, can help provide a meaningful response, but he’s not sure where to start. He’d like to find out more about how other churches are engaging on this issue, maybe develop a new ministry for his own community. This is a big issue, and he’d like to cast the net widely to see what ideas are out there. Is there a tool that can help him do this research more effectively? 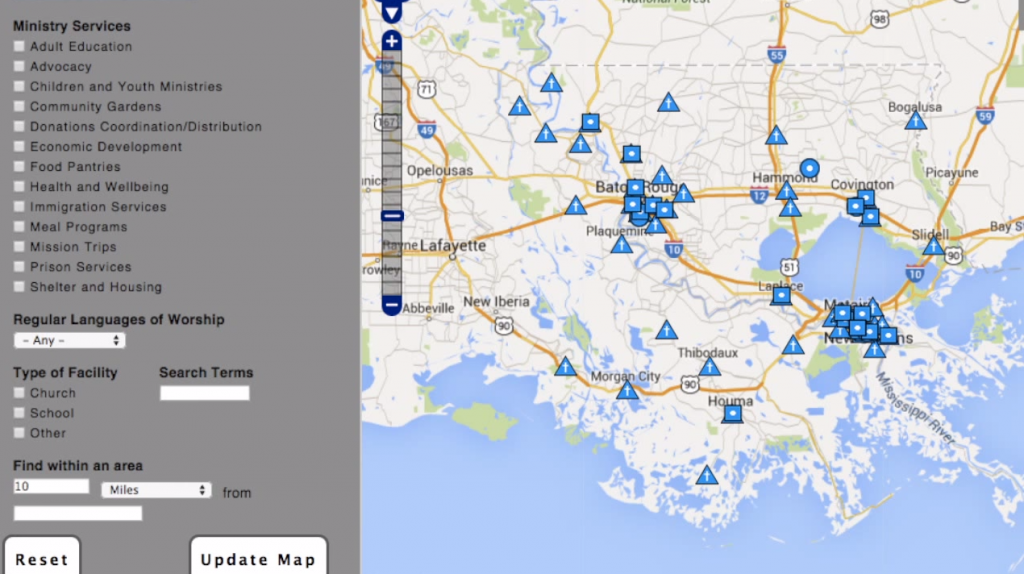 Rhetorical question! It’s the Asset Map of course. Paul could pull up his diocesan map or even the national map and search keywords he’s specifically interested in (‘solar’ or ‘renewable energy’) or comb through the ‘community garden’ or ‘advocacy’ tags.

This is just one of many examples of how the map can be useful, and that’s really where I see the particular value of the Asset Map. The map is not meant to be any particular thing to any particular diocese; there’s no required role that it’s meant to fill. The asset map isn’t a program, it’s a platform and a resource and a tool, populated and utilized locally, at the institutional and diocesan levels. It’s something being offered freely – and for free – to The Episcopal Church (rolling out first in the 50 US states, with potential for expansion in 2015-16) and we hope it can be useful to people serving in many different roles. 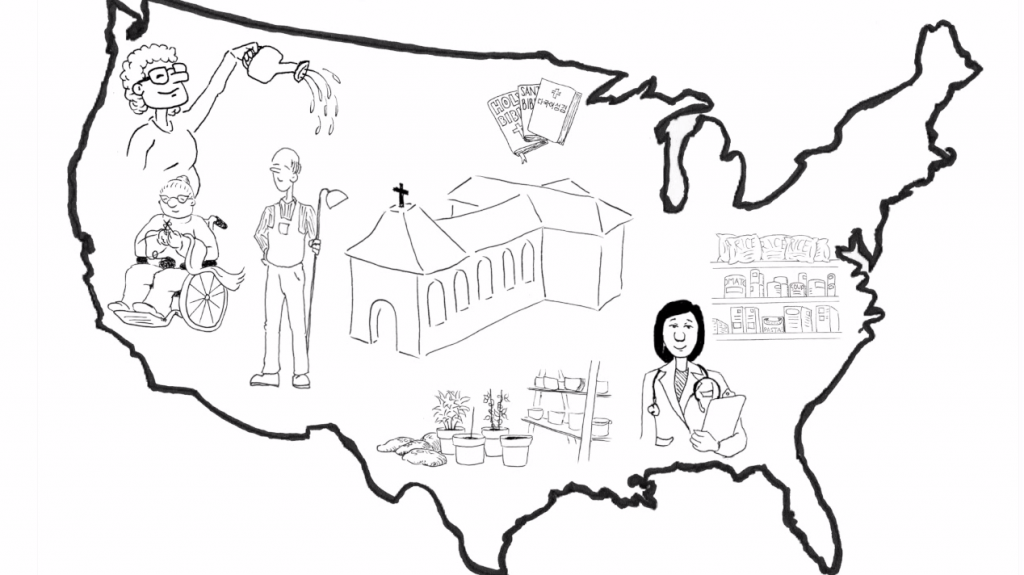 As I mentioned above, in organizing the asset map for the western US, I’ve gotten an invaluable aerial view on the ministry and organization of The Episcopal Church from Alaska to Florida. But the best part is that literally any of us – parishioners, priests, and bishops alike – can see all of this with just a few clicks of a mouse. Together, we’ve created a searchable, visual database to manage information about every Episcopal-affiliated institution across the 50 states.

Over the past few months, I’ve seen the Asset Map grow into a unique and powerful tool that truly enables The Episcopal Church to work together and connect as one body, whether it’s by responding to a disaster together, or collaborating on a ministry project that excites multiple congregations. Just the process of building the map was a collaborative effort from churches all around the country, and it would not have been possible without everyone’s help. We’ve thought of many ways to use the map, but I promise we haven’t even come close to thinking of all the uses for it.

If you’re interested in learning more, you can visit our pilot sites in the Dioceses of New York and Louisiana, check out this prime example of an institution’s map page or ogle at your own diocese’s map. 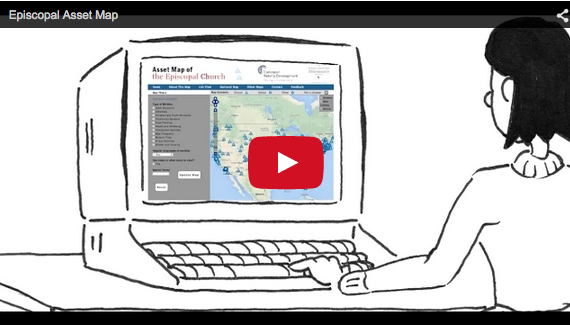 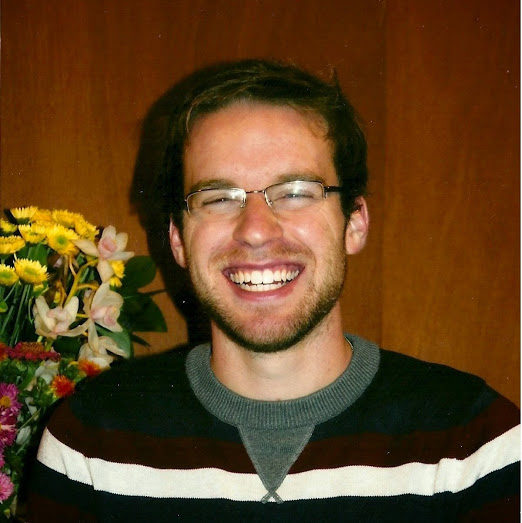 Ethan Lowery is a second-year Episcopal Service Corps intern and Virginia-native now living and working in Berkeley, California. He’s an ENFP, an enneagram-2w3, a Slytherin and a Pisces (but he doesn’t know what the last one means.)