Home | What We Do | Power of Partnerships | Seniors Work Together to Bring Fresh Water, New Life to Village 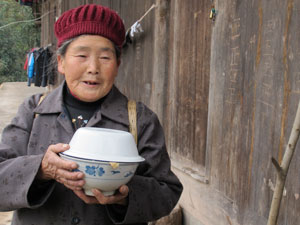 In Puxi Village, a tiny locale in the Hunan Province of south central China, Liqin (Lee-cheen) greeted her visitors warmly and invited them into her home for lunch.  She had just been packing up a meal to take to her husband, who was doing farm work in the field down the hill from their home.  As she turned on the tap in her kitchen to fill her kettle for tea, she said, “What a good job you have done!  Now we don’t have to worry about fetching drinking water from the ditch down the hill.”  At 72 years old, Liqin often worried about how to get down and back up the hill safely, especially when rain made the ground very slippery.  “Now we have tap water, which is very convenient,” she said.  “Thank you so much for helping us to solve this big headache!”

Liqin’s guests were from the Amity Foundation, Episcopal Relief & Development’s local partner in China.  Amity is an independent Chinese Christian voluntary organization that was created in 1985 to promote education, social services, health and rural development.  The organization is active across the country, from China’s coastal provinces in the east to the minority areas of the west, working with local groups and individuals toward sustainable development.  Its partnership with Episcopal Relief & Development currently encompasses a health and economic development program in Zhangfeng Township in southwestern China, and the water and sanitation program in three villages in Baojing County.

The program in Baojing began in 2012 in order to combat pollution and improve health in three rural communities: Puxi, Tiechang and Yama.  Although China’s ever-increasing need for food production has put pressure on rural agricultural areas, the quality of the environment in China’s rural areas is very important, both for the health of the people living there and for the future of sustainable development. The government has passed strict regulations on industrial pollution, but this is not the only source of environmental degradation.  Rural communities that lack sufficient waste disposal and sanitation infrastructure also contribute to pollution, and residents of these areas often suffer as a result.

Compounding these challenges is a factor that many rural areas face, which is that young people and able-bodied men tend to leave their villages and seek work in cities.  This is often a necessity, and the remittances that these workers send back form a substantial part of a family’s income.  However, this means that their home communities are primarily made up of women and elderly people, who may not feel that they have the skills or physical strength to undertake large construction or clean-up projects.

For Liqin and her community in Puxi, overcoming those feelings and recognizing the gifts and resources that they had were the first steps toward building solutions.  These activities are the at the core of Asset-Based Community Development, a framework used by Episcopal Relief & Development that identifies and mobilizes area resources to build programs that are locally led and customized to fit the community.  At the beginning of the program, before any work was started, our partners at Amity visited the three villages and gathered with all of the community members to do a mapping exercise.

“Since we are to implement the drinking water system and garbage disposal system, which involves every household,” wrote local partner Peng Zhong in a report, “we need to get a picture of the village map in our head [and] also in each villager’s head. In Puxi Village, we asked them to gather together and draw maps of the village and discuss how the project should be implemented.”

Peng continued, relating the story of Ms. Liu, an elderly woman who lives with her husband and their disabled 40-year-old son.  “She held my hand and said, ‘Young Peng, thank you, what you have just helped us to draw is not just the map of our village, but the better future of us.”

The plan that the community members developed with facilitation from the Amity Foundation incorporates the construction of rainwater catchment systems and water storage tanks, the installation of sanitary toilets next to people’s homes and the implementation of garbage collection and disposal systems.  The overall goals of the project are to separate and protect rainwater from pollution sources, and to preserve the environment through safe and effective waste management.

Liqin and her neighbors in Puxi have made significant progress on their projects, though it has not been without challenges.  Chief among them are the remoteness of the village – 6 miles away from the nearest town on an unpaved road – and the age of the inhabitants.  “People around 60 years old in the village are considered as ‘young people,’” an Amity Foundation report says.  Yet rather than give up, the community is taking things at their own pace and completing the projects in stages.

“All of the beneficiaries of [the] drinking water and sanitary toilet project have participated in digging the tank or laying the pipe,” the report continues.  It takes 10 days to finish digging a tank with size of 6’ x 8’ x 10’, which has slowed down the overall timeline of the project, but the community members feel very satisfied with their efforts and with the result.

“It is very hard work indeed,” said Liqin, “but we must work very hard too.  I am getting old and am ready to see God.  In my lifetime, I never expected to use such a kind of sanitary toilet.  It is really convenient and clean.”

Overall, more than half of the households in the village now have access to safe tap water and sanitary toilet facilities, and many people are using the garbage cans and collection sites to dispose of their refuse.  These efforts have greatly improved the living conditions and environment in the Huapuxi watershed, and the communities have established village environmental protection committees to help sustain progress and guide further projects.  Eventually, as the villages in Baojing grow and develop more sophisticated infrastructure, agriculture and cottage industries can expand, bringing more life to the communities and even encouraging young people to stay and raise their families there.

“It’s something we see quite often, young people from rural areas leaving home to find work in the cities, but life definitely continues back home,” said Nagulan Nesiah, Program Officer for Episcopal Relief & Development.  “Our partner, the Amity Foundation, is doing wonderful work in three mountain villages, helping local residents to get together and envision a better future.  The work they are doing makes a difference in the lives of people living there now, but the hope is that small improvements will start to add up and create a place where young people will want to stay.  All in all, these activities help further the larger goals of alleviating poverty, protecting the environment and strengthening families and communities.” 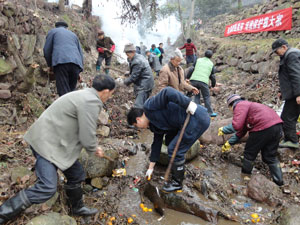 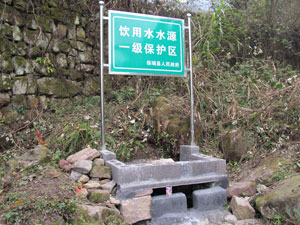 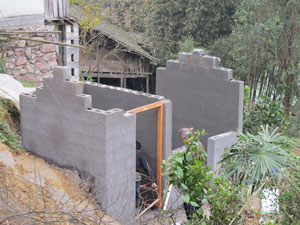