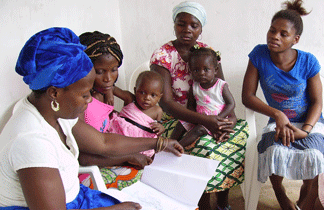 “Unless women fully enjoy their human rights, to which freedom from violence is inextricably bound, progress toward development will continue to fall short.”  USAID

Gender roles and other social norms impact every area of Episcopal Relief & Development’s work, and addressing gender-based violence (GBV) is a major area of focus. GBV affects the health and well-being of women in every country, regardless of socioeconomic or ‘development’ status, and almost all of our partners identify violence against women and girls as a major obstacle to healthy and prosperous families and communities. There is a great need for the voice and action of faith leaders, communities and institutions to prevent and respond to GBV, and to restore the health, dignity and livelihoods of women and girls affected by violence.

Although GBV is often associated with countries experiencing conflict, it is present everywhere, in various forms such as domestic violence, rape and the marginalization of girls and women across cultures and nations. Stemming from attitudes and practices around gender and power that are deeply ingrained in society and culture, GBV is a sensitive issue and often falls by the wayside of community dialogues and interventions. Change must come from within those communities to be lasting and effective, and faith leaders have a unique position of trust and influence at both the individual and community levels to enable and encourage such change. Our programs aim to empower these leaders and to leverage their roles in their communities to become champions for the support, protection and empowerment of survivors of violence, and of women and girls in general.

Episcopal Relief & Development recognizes that this global epidemic impedes the transformation of just societies, erodes the human assets and strengths of a community, causes severe health problems for women and children and stunts health economic activity.

Our current strategic plan focuses on supporting our church partners to strengthen and improve their efforts by:

Providing women with opportunities for social and economic empowerment helps give them a stronger voice in household decision-making and self-confidence that earns them respect in their households and in the wider community. Your donation to our Women’s Empowerment Fund supports programs that equip women with support networks, training and resources to make a brighter future for themselves and their families. Our programs engage men, women and youth so that communities can move forward together.

Description: In partnership with the Province of the Anglican Church of Burundi (PEAB), Episcopal Relief & Development supports an integrated, multi-sector ...

Description: Episcopal Relief & Development is partnering with the Province of the Anglican Church of the Congo (PEAC) to address violence against women by ...